Romney makes England uncomfortable with comments about the Olympics

By DiMarkco Chandler on July 27, 2012Comments Off on Romney makes England uncomfortable with comments about the Olympics 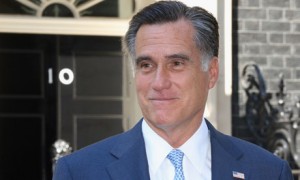 By Albert Angulo
London  July 26th 2012: In what was suppose to be Mitt Romney’s flawless  world stage debut , instead the republican  presidential candidate offended his British hosts by questioning London’s preparation for the Olympics:
“There’s a guy called Mitt Romney who wants to know whether we’re ready,” London Mayor Boris Johnson told 80,000 cheering people gathered at Hyde Park for the arrival of the Olympic torch. “Are we ready? Are we ready? Yes, we are!” the crowed screamed .
When British reporters called Cameron’s attention to those comments, he offered a sharp retort, saying London is hosting the games in one of the “busiest, most active” cities in the world. Of course it’s easier if you hold an Olympic Games in the middle of nowhere,” a remark interpreted as a reference to the games organized by Romney in Salt Lake City, Utah.

For his part, Romney tried to clear up his previous statements at later press conference.