The Unreported Unemployment of Young Americans 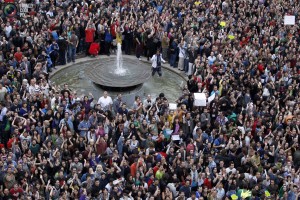 By Randy Rose:
We focus on the number of jobs created each month and affix a false percentage they call the unemployment Rate which sits today at 8.3% but the real number is closer to 14%. Paul T. Conway is a former Chief of Staff of the U.S. Department of Labor and U.S. Office of  Personnel Management had this to say about todays jobs numbers.
“Today’s unemployment number is another indicator of the far greater, more fundamentally devastating, and still under-reported story impacting young Americans. For nearly three and half years, young Americans have experienced historically high unemployment levels – levels that are among the highest since the end of World War II – that tell the story of millions of delayed dreams and careers of the next greatest generation.
“Instead of aggressively embracing policies that liberate businesses to create more jobs, the President and his appointees have pursued an agenda that suffocates economic opportunity under the weight of more spending, higher debt, more regulations, and higher taxes. For young Americans, the message from their government is clear – we are not responsible if our destructive policy decisions eliminate your plans for full-time meaningful jobs in a career path of your choice. Even worse, elected officials in Washington are proving themselves to be coldly distant from the human costs of unemployment, the personal stresses and frustrations that come from the uncertainty surrounding unemployment.
“Millennials deserve better from their government, especially in light of what they have already contributed to this country. They are the generation that witnessed the 9/11 terror attacks on US soil, bravely responded to fight two wars overseas, selflessly helped rebuild New Orleans and other Gulf Coast communities after Hurricane Katrina, and offered their personal support to those most impacted by the economic collapse. Yet, each day they awake to an economic reality, which includes record high unemployment and limited opportunities. Their message to all candidates is clear – we want to get on with our lives and realize our dreams. However, if the solutions you offer equal less jobs and more debt for our country, you will fail to win our enthusiasm and our vote.”
This is why we must elect Chris Edwards, Danny Tarkanian and Dean Heller. Chris Edwards and Danny Tarkanian will co-sponsor HR 25 the Fair Tax Act which will cause the economy to skyrocket and will cause unemployment to fall below 4%.