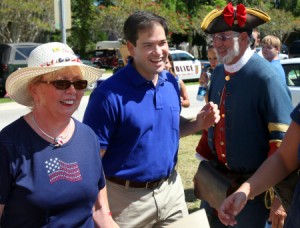 This is what we face under control of the extreme right. If you don’t know who Allen West is, that’s no surprise. But you know his type and his efforts to lead the political right down a path of obstructionism. He is a member of the House of Representatives. He represents Florida’s 22nd congressional district, and although he was elected as a republican, he is actually a member of the TEA party. The distinction is important, because republicans are, or were, more moderate and less destructive on most issues. Mr. West is a radical conservative. He is an African-American, retired from the army as a lieutenant-colonel.

A little history about Mr. West. While serving in Iraq, he heard a rumor that a plan was being organized to ambush and kill him and the soldiers who traveled with him. The name of a civilian police officer by the name of Hamoodi was given to him as the central figure in the plot. West had his men abduct Hamoodi, and began an intense interrogation. He was beaten by West’s men, and West himself fired his pistol next to Hamoodi’s head. Hamoodi gave them the name of several men involved in the planning of the suspected attack. Hamoodi was eventually released. One of the individuals, whose name he had given West was subsequently arrested. When he was questioned and his residence was searched, no evidence was found relating to any attack.

West was charged with violating acts of the Universal Code of Military Justice. West defended himself saying he was trying to protect his men from violence. The original charges were dropped, and he was given disciplinary action in the form of an ‘Article fifteen proceeding’. He was fined 5000 dollars.

When the investigation was under way, Hamoodi was questioned. They asked him why he gave West the names. He responded that he would have said anything that would end his torture.

On April 11, 2012, while speaking at a town hall meeting in Florida, an audience member asked him what percentage of the federal legislature he believed to be card carrying communists. He responded that it was 78 to 81 percent of Democrats. They were the members of the Congressional Progressive Caucus.

Today, when the new labor figures were released, and for the first time in four years they dropped under eight percent to 7.8, he is making another rush to judgment. He claims the numbers were “doctored” to favor Mr. Obama’s re-election campaign.

And what did Mr. Romney say when the central message in his campaign has been that ‘8% unemployment has been going on for four years’? “It’s not enough.”

As too many of us have said too many times, ‘our government is broken’.