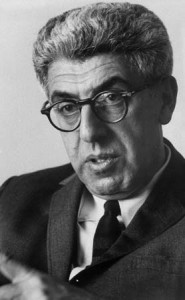 American biologist and former United States presidential candidate, Dr. Barry Commoner died Sunday at age 95. Dr. Commoner was known worldwide as a champion of environmental issues and much of his work as scientist and activist was spent highlighting the ecological relationship with economic and social systems.

Commoner insisted that scientists had an obligation to make scientific information accessible to the general public, so that citizens could participate in public debates that involved scientific questions. Citizens, he said, have a right to know the health hazards of the consumer products and technologies used in everyday life. Those were radical ideas in the 1950s and 1960s, when most Americans were still mesmerized by the cult of scientific expertise and such new technologies as cars, plastics, chemical sprays, and atomic energy.

Commoner linked environmental issues to a broader vision of social and economic justice. He called attention to the parallels among the environmental, civil rights, labor, and peace movements. He connected the environmental crisis to the problems of poverty, injustice, racism, public health, national security, and war.

Commoner first came to public attention in the late 1950s when he warned about the hazards of fallout caused by the atmospheric testing of nuclear weapons. He later used his scientific platform to raise awareness about the dangers posed by the petrochemical industry, nuclear power, and toxic substances such as dioxins. He was one of the first scientists to point out that although environmental hazards hurt everyone, they disproportionately hurt the poor and racial minorities because of the location of dangerous chemicals and because of the hazardous conditions in blue-collar workplaces. Commoner thus laid the groundwork for what later become known as the environmental justice movement.

Born in 1917, Commoner grew up in Brooklyn, New York, the child of Russian Jewish immigrants. He studied zoology at Columbia University and received a doctorate in biology from Harvard University in 1941. After serving in the Navy during World War II, Commoner was an associate editor for Science Illustrated and then became a professor at Washington University in St. Louis, Missouri, a position he held for thirty-four years. There he founded, in 1966, the Center for the Biology of Natural Systems to promote research on ecological systems. He later moved the center to Queens College in New York.

While serving in the Navy, Commoner discovered the disturbing unintended consequences of technology. He was put in charge of a project to devise an apparatus to allow bombers to spray DDT on beachheads to kill insects that caused disease among soldiers. The military wanted to remove the insects before troops landed. Commoner’s crew discovered that the DDT sprayed from bombers effectively eliminated hordes of flies on the beach, but also that more flies soon came to feast on the tons of fish that the DDT had also killed. This lesson became a central theme for Commoner throughout his career: humans cannot take action on one part of the ecosystem without triggering a reaction elsewhere.

After the war, many scientists, including Albert Einstein, alarmed by America’s use of the atomic bomb on Japan in 1945, began to rethink their role in society. They questioned whether dropping the bomb had been necessary for the United States to win the war. They were shocked by the scale of the damage in terms of both immediate deaths and long-term human suffering. And they worried about the potential for a prolonged arms race between the United States and the Soviet Union, which, they feared, could end in a nuclear war in which all humanity would be the losers.

As Commoner told Scientific American in a 1997 interview:

The Atomic Energy Commission had at its command an army of highly skilled scientists. Although they knew how to design and build nuclear bombs, it somehow escaped their notice that rainfall washes suspended material out of the air, or that children drink milk and concentrate iodine in their growing thyroids. I believe that the main reason for the AEC’s failure is less complex than a cover-up but equally devastating. The AEC scientists were so narrowly focused on arming the United States for nuclear war that they failed to perceive facts — even widely known ones — that were outside their limited field of vision.

Commoner and other scientists — including chemist Linus Pauling (a professor at the California Institute of Technology and a Nobel Prize winner) — believed they had a responsibility to sound the alarm about the potentially devastating effects of nuclear fallout. In 1956, when Adlai Stevenson ran for president as the Democratic Party nominee, he sought Commoner’s advice and then called for the United States to take the lead in ending nuclear testing.

In 1958 Commoner and other scientists and activists formed the Committee for Nuclear Information with the goal of educating the public to understand how, in Commoner’s words, “splitting a few pounds of atoms could turn something as mild as milk into a devastating global poison.” They started a new publication,Nuclear Information (later renamed Scientist and Citizen), to discuss the responsibility of scientists to the larger society. They drafted a petition, signed by 11,021 scientists worldwide, urging that “an international agreement to stop the testing of nuclear bombs be made now.” These activities created a groundswell of public opinion that eventually helped persuade President John F. Kennedy to propose the 1963 Nuclear Test Ban Treaty.

Commoner’s early experience with DDT led him to espouse what scientists call the “precautionary principle” — that new chemicals and technologies should not be introduced into society if there is reason to believe that they pose a significant public health risk. They should be approved only after it can be demonstrated that they are safe. Commoner warned about the risks to human health posed by detergents, pesticides, herbicides, radioisotopes, and smog. He argued that polluting products (such as detergents and synthetic textiles) should be replaced with natural products (such as soap, cotton, and wool). He alerted the public to the negative effects of nuclear power plants, toxic chemicals, and pollution on the economy, birth defects, and diseases like asthma.

In the 1970s Commoner spoke out against the view that overpopulation, particularly in the Third World, was responsible for the increasing depletion of the word’s natural resources and the deepening ecological problems. The thesis was popularized by Paul Ehrlich (in his book The Population Bomb) and other scientists, but Commoner challenged those who echoed the ideas of the 19th-century British thinker Thomas Robert Malthus.

As Commoner argued, it is rich nations that consume a disproportionate share of the world’s resources. And it was their systems of colonialism and imperialism that led to the exploitation of the Third World’s natural resources for consumption in the wealthy nations, making the poor even poorer. Without the financial resources to improve their living conditions, people in developing countries relied more heavily upon increased birthrates as a form of social security than did people in wealthier nations.

In The Closing Circle (1971), Commoner argued that our economy — including corporations, government, and consumers — needs to be in sync with what he called the “four laws of ecology”:
Everything is connected to everything else.
Everything must go somewhere.
Nature knows best.
There is no such thing as a free lunch

The Closing Circle helped introduce the idea of sustainability, a notion that is now widely accepted but was controversial at the time. As Commoner pointed out, there is only one ecosphere for all living things. What affects one, affects all. He also noted that in nature there is no waste. We can’t throw things away. Therefore, we need to design and manufacture products that do not upset the delicate balance between humans and nature. We need to utilize alternative forms of energy, such as wind, solar, and geothermal power. And we need to change our consumption habits accordingly — to use fewer products with plastics (which are based on oil), aerosol cans (which harm the atmosphere), and industrial-grown food (which is produced with harmful chemicals).

In the 2007 interview with the New York Times, then-90-year-old Commoner remained the relentless radical:
I think that most of the ‘greening’ that we see so much of now has failed to look back on arguments such as my own — that action has to be taken on what’s produced and how it’s produced. That’s unfortunate, but I’m an eternal optimist, and I think eventually people will come around.