The reality T.V. show, “Jersey Shore” broke new ground when it first premiered in Dec. of 2009. Home viewers were glued to their television sets as they saw a reality that only a few years before would have never passed the rules of Broadcast etiquette. The language was crass and it involved seemed to involve more law enforcement personnel that the T.V. show cops. The show debuted amid large amounts of controversy regarding the use of the words like “Guido/Guidette,” portrayals of Italian-American stereotypes, and scrutiny from locals because the cast members were not residents of the area. But in spite of these drawbacks the show garnered record ratings. But this of course is not a Eulogy, it’s simply an introduction to a recap and review of the show’s upcoming sixth and final season. For five seasons, the Jersey Shore cast have been famous for their love of heavy partying, with Nicole ‘Snooki’ Polizzi one of the most wild of housemates. But in the sixth season premiere of the show, the pregnant star decided to leave the party house for the sake of her unborn baby.

“I don’t think a pregnant person should be in this house, so I am considering getting my own place,” she told the housemates.

“I’m concerned about having alone time and getting rest. I still want to be with my roommates and hang out,” she added, after arranging to move into a small apartment nearby.

“I don’t feel comfortable living in a party house while I’m six months pregnant. I want to be somewhere where it’s nice and clean.”

Snooki has since given birth to baby Lorenzo, but made the decision to leave the house just days into filming, much to the disappointment of her housemates.

“It’s sad that she’s going to be there, but it’s Lorenzo that has to leave,” said Jenni “JWoww” Farley.

“Snooki is a different person now she is pregnant. We definitely support her decision,” said Vinny. Unable to even go tanning, the pint sized star clearly felt left out in the infamous party house. She even shunned her usual clubbing in favour of an intimate dinner with fiancé Jionni, but missed the other housemates, who were dancing the night away at nearby club Karma. “I don’t want to be around drinking because it really upsets me because I want to have fun too,” said Snooki. “I’m like an old lady who can’t do anything.”

It was certainly much more a sober house on Thursday’s premiere with Mike ‘The Situation’ Sorrentino now clean of prescription drugs after spending time in rehab.

There were other changes in the house too, with Deena happy with her boyfriend, Chris and Mike getting more serious with Paula.

Mike’s apology for his behavior over the last few seasons fell on deaf ears with Snooki and JWoww, but the boys were happy with the ‘new improved’ Situation.

The Situation stuck to water at the club and felt better for it, but tearful Deena had a minor meltdown in the club as she missed her new boyfriend Chris.

Ronnie got drunk and ended up arguing with girlfriend Sammi in the middle of the club after getting angry at her for not eating before she came out.

Meanwhile, Vinny starting getting on Snooki’s nerves by constantly joking that he is the father of her unborn baby.

The episode is the last season after five series of the show which has dominated the Nielsen ratings, drawing as many as eight million viewers and consistently ranking as the number one cable series in the much desired 12-to-34-year-old demographic.

It’s been three years after it debuted and became a pop-cultural situation spawning catchphrases, punch lines, hairdos and tabloid fodder. 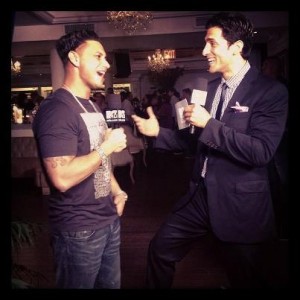 But the show’s cast is not quite ready for their 15 minutes of fame to end. “That was the longest 15 minutes of my life!” Ronnie Ortiz-Magro boasted during a recent interview with his pals.

“We got, like, a half hour,” joked Paul ‘Pauly D’ DelVecchio.

What began as yet another MTV reality show – The Real World with fist-pumping Italian-American twenty somethings – became one of the network’s biggest hits.

As the popularity of Jersey Shore grew, so did disdain for the series documenting the drunken antics of Nicole ‘Snooki’ Polizzi, Mike ‘The Situation’ Sorrentino and the rest of the cast.

Despite the continued unapologetic success of the series, MTV announced this summer that the sixth edition would be the last call for the Jersey Shore cast and crew, who fled winter for Miami Beach in the second season and travelled to Italy for the fourth edition.

It’s a bittersweet moment for the tanned troupe, who have no interest in fading out of the spotlight.

The start of the sixth season, again filmed over the summer in Seaside Heights, New Jersey, found the cast at very different places in their lives: Snooki was six months pregnant and engaged, Deena had just dropped several pounds and gained a boyfriend, and Mike ‘The Situation’ vowed to stay sober after a stint in rehab for an addiction to painkillers.

A lot of the premiere was similar: reminiscent of the show’s glory days, but without the outlandish behavior that made the series great. And when the cast wasn’t too busy pumping iron to hold actual conversations, I often felt as though I was looking in on a high school reunion, with the roommates waxing poetic about the good ol’ days.

Even once the gang (minus Snooki) was out at Karma, they didn’t seem able to re-create the spontaneity – and immaturity – that turned “Jersey Shore” into a cultural phenomenon. Maybe it’s because the roommates have grown up or maybe it’s simply that they’ve been doing the same thing every summer for four years. Vinny even points out that he’s already “smashed” every girl at Karma. So what’s a juicehead to do now? Go grenade-hunting?

But never fear: Not all hope is lost at the “Shore” this year.

Season 6 may have started out with a whimper, but the series kicks it up a notch in the second episode with some classic “Shore” drama. A Ronnie-and-Sammi fight? Check. Unforeseen things getting in the way of Mike and Pauly getting laid? Check. Absurd rules from the “Swag Handbook”? Check, check, check! (Not to mention, we already know there’s a big arrest on the way for one of the housemates this season.)

That’s why even after the rather lame tame premiere, I’m still willing to give “Jersey Shore’s” final season a chance – at least for a little while longer. Then again, I’m a sucker for nostalgia.