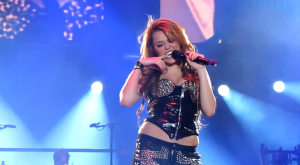 Back in 2011, Miley Cyrus covered Nivana’s signature anthem, Smells Like Teen Spirit. I realize this has been written of and complained about, ad nauseam, but my editor told me I had to write about Miley Cyrus today, so here you go, boss.

In studded jeans and a bustier, Miley Cyrus ignores the very ideas Kurt Cobain’s riff was written to represent. She awkwardly dances around for a bit, then kind of head-bangs for a moment, then moves around seductively on stage leading up to the first verse. Right before she starts to sing she gets really serious. Because that’s when a song always gets serious, right – when the words start?

Cyrus begins the verse by squinting and staring into the distance with melancholy, proving that despite her fame, she understands how difficult the disenfranchised have it. She connects to this world so much and the words are so important to her that she almost makes it through the whole first verse without biting her finger like the pop star she has been and mumbling the rest of the line. Ironically, the mumbling could have indicated Miley Cyrus actually understood something about the song, but then she leaned over and screamed the chorus with as much intensity as she could muster. Hey, what are the words to that chorus, by the way?

A mulatto? An albino? A mosquito? My libido?

I stopped watching at this point. I could take no more of her missing the point so egregiously. Don’t misunderstand; I’m not arguing the quality of Miley Cyrus’ voice or that of the band playing the song. Jackson Thomas is not sitting on his porch with a broom shouting at kids to get off his lawn. I appreciate a good cover of a popular song. Hell, I encourage it. But this is not a good cover. There is no respect here.

Aretha Franklin knows a little something about respecting an original song in a cover. Her biggest hit was an Otis Redding tune and she did it better than he did. She was sassy and brash and made the song her own by understanding she didn’t have to perform it the way he did and she didn’t have to sing it pretty. What she had to do what put herself in it all the way and let go. After all, music is about creation, not repetition.

Still, if one is to effectively cover a song, one must understand what the song they’re covering represents. Take Jimi Hendrix’s cover of Bob Dylan’s All Along the Watchtower, for instance. His version is vastly different from the original, but the idea of the song remains the same. Dylan had this to say about the cover: “I liked Jimi Hendrix’s record(ing) of this and ever since he died I’ve been doing it that way. Strange how when I sing it, I always feel it’s a tribute to him in some kind of way.”

There you have it: a copy of a copy while integrity remains intact. What matters is how the song is represented by the person covering it. Knowing this, what would Kurt Cobain have done if he knew Miley Cyrus covered this song? As macabre as it sounds, he’s probably already done it.

So what, then, is Smells Like Teen Spirit about? What does it represent? In a nutshell it’s an anti-establishment song…and everyone reading just said “Duh, 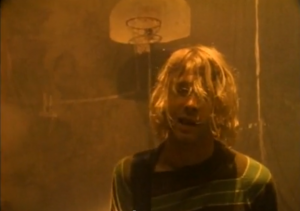 Jackson.” I know – not exactly a ground-breaking sentence. Still, it’s worth mentioning that the “musical establishment” of the late ‘80s/early ‘90s was the likes of Poison, Cinderella, and Warrant – bands who placed an inordinate amount of importance on semi-coherent lyrics while emphasizing big hair and theatrics over musical content. It was C.C. DeVille playing absolutely nothing, but playing it fast as hell. It was Warrant besmirching the name of Harriet Beecher Stowe. It was a time of inauthenticity – a time when the haves seemed to have it all while the have-nots had nothing.

Before he was known as the front for Nirvana, Kurt Cobain spent his days hanging out under a bridge because he had nowhere else to go. He slept in a hospital waiting room. To say he was frustrated would be an understatement and it showed in his music. Not his lyrics or his style…his music — his tone. It was the sound of Smells Like Teen Spirit that mattered. The fury of Cobain condensed into the point of his guitar pick as he ripped through the opening riff – that simple, heavily-distorted, wonderful riff. It was the condescending sneer on his face while he “performed” for the crowd in the music video. It was the simplicity of the lyrics and the contempt contained within his guitar lead, where he literally plays the melody of the verse to show that none of the pomp and circumstance matter.

Somehow it worked, and they became the biggest band in the world for a while. Nirvana was “cool” all of the sudden. What’s funny is Kurt Cobain was never cool; he was always that outcast kid who sat away from everyone else. The one made fun of by the “important people” in society. All of the sudden they loved him. Yet they didn’t. These people loved an idea – The Hypothetical Cobain.

They claimed to love the meanings they projected into lyrics specifically written to be nonsensical. They claimed to love the music, even when Nirvana released songs full of distortion and ear-splitting feedback to make these people stop listening to them. Cobain played poorly intentionally. It’s brilliant because it works within the scope of the songs, many of which are simply organized chaos mocking the music industry and the fans who don’t get it. Do you doubt this? Go pull out a copy of In Utero and listen to Radio Friendly Unit Shifter, Milk It or Scentless Apprentice and marvel at how much disdain he held for the people who claimed to love him.  Hell, listen to Serve the Servants and notice that Kurt audibly clears his throat before coming back in vocally after his guitar lead. He did not care about impressing anyone at that point.

Fast forward 20 years. Miley Cyrus wants to impress everyone. It seems everything she does is to improve her image to make her more marketable so she can make more money. While there’s no doubt she has worked to get where she is, she was also presented with opportunities most people are not. Regardless, it’s undeniable that Cyrus is rich, popular and considered “cool” by millions of people … and she’s covering Smells Like Teen Spirit? Really? The pop-stardom of Miley Cyrus is the antithesis of everything Kurt Cobain represented.

Why this song? Because it’s the one everyone knows. Everyone. It’s “cool.” For a person who claims to not care what people think, it’s obvious the opinions of others do matter. For some reason she needs to be liked and she needs to be famous; if there were no truth to that she wouldn’t gravitate towards songs like Smells Like Teen Spirit. This is why Nirvana is important and Miley Cyrus is a still just a pop star. She still needs to be considered cool. Nirvana never did. In fact, they rejected the suggestion just like the great ones who came before them.

Earlier I spoke of Bob Dylan and his attitude towards covers. Dylan has evaded the spotlight of celebrity for decades while offering little explanation for the “real” meanings of his songs. The listener either understands this or does not; there is no in between. In a recent interview, he discussed how personal his songs were and are to him, saying his words and feelings are his to sing. He said “it would sound funny” to hear other people perform his songs. Why is this important? Miley recently covered You’re Gonna Make Me Lonesome When You Go, a personal song from one of Dylan’s most personal albums.

“It sounds funny,” doesn’t begin to describe it. Miley Cyrus sitting in a room specifically designed to look rustic, while singing the words of a poet like a pop star over an overly-produced audio track makes me want to throw up in my mouth. I understand this song was recorded for a Bob Dylan tribute album, but again, a covered song should retain the spirit placed into it at its genesis.

To destroy the context of a song and use it as a platform for success is shameful, but understandable. For an established performer to exploit artists such as Kurt Cobain and Bob Dylan in order to help legitimize their career, especially when they possess little to no understanding of the subject matter or passion with which these songs were created? That’s reprehensible.

Miley Cyrus’s exploitation of Cobain and Dylan to legitimize career is reprehensible added by Jackson7 on October 26, 2012
View all posts by Jackson7 →