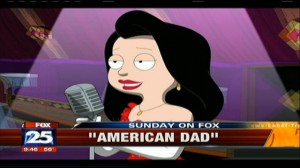 Seth MacFarlane’s rising star has hit a black hole igniting a firestorm of complaints from parents groups responding to Sunday night’s premiere episode of MacFarlane’s “American Dad.” The complaints specifically point out that the episode displayed “graphic verbal and visual reference to oral sex and ejaculation.” The Parents Television Council (PTC) is specifically asking their member to file FCC complaints against the episode arguing that the graphic adult content airs in some parts of the U.S. at a time when there are millions of children in the audience.

While it’s not likely to affect MacFarlane’s upcoming assignment as host of the 85th Academy Awards the actor—comedian may nevertheless get hit by a fine from the FCC.

Recently, MacFarlane’s top notch performance on “Saturday Night Live,” was one of the reasons the Motion Picture Academy selected him to host the 85th Academy Awards.

ABC made the announcement in a press release last week.

“We are thrilled to have Seth MacFarlane host the Oscars. His performing skills blend perfectly with our ideas for making the show entertaining and fresh,” producers Craig Zadan and Neil Meron said in the release. “He will be the consummate host, and we are so happy to be working with him.”
“It’s truly an overwhelming privilege to be asked to host the Oscars,” MacFarlane said in the release. “My thoughts upon hearing the news were, one, I will do my utmost to live up to the high standards set forth by my predecessors; and two, I hope they don’t find out I hosted the Charlie Sheen roast.”
MacFarlane’s hosting gig will mark his first appearance on the Oscar stage. Recently, he hosted the season premiere of “Saturday Night Live,” showing off his versatility as he sang and did voices during his opening routine.

MacFarlane made his feature directorial debut this past summer with the box office hit “Ted,” which he co-wrote and produced, while voicing the title character. In addition to “Family Guy,” MacFarlane is also the co-creator of “American Dad!” and “The Cleveland Show.”

MacFarlane, of course, is the force behind a good chunk of Fox’s Sunday “Animation Domination” franchise, having created ”Family Guy,”and co-created “American Dad!” and “The Cleveland Show.”

But the reason the film academy decided MacFarlane’s first appearance on Oscar’s stage should be as host, the academy made very clear in Monday’s announcement, is because MacFarlane’s flick “Ted” — which he directed, co-wrote, produced and “starred” in as the voice of plush-toy bear Ted — has brought in more than $420 million in worldwide box office, making it one of the year’s highest-grossing films. Producer NBC Universal owes thanks to repeat viewing by young guys.

Only, it’s a much smarter bid than two years ago, when the academy selected James “Phoning It In” Franco and Anne Hathaway to co-host the show, setting a new bar for Oscar-hosting awfulness.

You and I know the host does not necessarily determine a trophy show’s median age. Take last year’s Hathaway/Franco hosted show. Median age: 51 . Now look when Billy Crystal hosted in 1998. Median age: 41. Why? “Titanic” was up for Best Picture, resulting in record teen-chick Oscar viewing, according to Nielsen stats.

“I will do my utmost to live up to the high standards set forth by my predecessors. . .and I hope they don’t find out I hosted the Charlie Sheen roast,” MacFarlane said of his selection.

Anyway, the “Ted” reference is a bit embarrassing for Fox, having passed on the flick. We’re guessing NBC Universal is as pleased as punch with the academy’s pick.

Although an Oscar virgin, MacFarlane is a seasoned show host. He recently got rave reviews for hosting the 38th-season debut of NBC’s “Saturday Night Live.”

And the Charlie Sheen roast was the most watched show in that long-running Comedy Central franchise, though we’re guessing that had more to do with Sheen being roasted. (Earlier that night, over on CBS,Sheen’s Charlie Harper character was run over by a train in Paris and Ashton Kutcher moved into his Malibu mansion, ending one of the most public breakups of a TV star from his hit series in TV history.)

Presumably, MacFarlane will be better prepared to host the Oscars than he was as a presenter at the recent Emmy Awards. Tapped to present the award for Best Reality Show Host, he began to read from the TelePrompTer, only no one could hear him because he was nowhere near a microphone.

“Oh, the mic’s over there! This is what happens when you don’t come to rehearsal,” he deadpanned in his “Family Guy” Stewie voice, when someone brought his mic-less-ness to his attention.

The 85th Annual Academy Awards will be broadcast by ABC on Sunday, Feb. 24, live across the country. And, by “live,” with MacFarlane hosting, we’re guessing that means a several-seconds- longer-than-usual delay, with the finger of the sharpest shooting member of the ABC Decency Police on the button. Upon learning of the Oscars’ choice, Parents TV Council tweeted its outrage, citing gags that he delivered during that “vile mélange of explicitly sexual, drug-oriented, and racist ‘humor’ ” that was the Sheen roast.

Back in August, it was widely reported NBC late night star Jimmy Fallon would host the next Oscar show, which would be executive produced by h
is mentor, Lorne Michaels.

Turned out, that report was not right — on either count.

In August, Fallon stopped by “Today” show’s operations at the London Summer Olympics to tell Matt Lauer it was “an honor to be asked but it’s not my year,” though it’s unclear if that ever got beyond the “talking” stage, according to insiders — and the film academy announced that Broadway, filmand TV producers Craig Zadan and Neil Meron would produce the upcoming Academy Awards, not Michaels.

You may know Craig and Neil as the exec producers of NBC series “Smash.”

You may also know Craig and Neil as exec producers of the movie that won the Best Picture Oscar at what became, at that time, the least watched Academy Awards on record. The year was 2003 and the movie, “Chicago.”

Craig and Neil also produced or exec produced the ABC teleflick “Life with Judy Garland: Me and My Shadow,” CBS’s Bette Midler version of “Gypsy,” the controversial miniseries “The Reagans,” both rounds of the feature flick “Footloose,” and the Broadway re-stagings of “How to Succeed in BusinessWithout Really Trying” and “Promises, Promises.”

MacFarlane is the bold hosting choice that the academy needed to make after last February’s debacle, in which Billy Crystal wound up getting his ninth hosting at-bat.

For the first time in maybe forever, that Oscars wound up attracting a smaller audience than did the Grammy Awards show, at which the music industry laid its heart at the feet of its fallen heroine, Whitney Houston.

Crystal was an 11th hour fill-in when designated host Eddie Murphy stepped down after Brett Ratner “resigned” as Oscar producer, in the wake of a string of slur-and-potty-mouth moments at a movie screening and on Howard Stern’s radio show.

Although the Oscars scored nearly 40 million viewers — a good number for the franchise, and nearly 2 million better than the previous year — Crystal’s performance was generally panned. Especially the bit where he performed in blackface.

MacFarlane spent most of his childhood in Connecticut obsessing over animation. He first drew Fred Flintstone and Woody Woodpecker when he was 2. Also a theater geek in high school, he attended the Rhode Island School of Design where his senior thesis, “Life of Larry” became the inspiration for “Family Guy.” That thesis landed him his first job in Hollywood, drawing for Hanna-Barbera before he pitched “Family Guy” to Fox in 1998.

MacFarlane, who is single and lives in Los Angeles, will be juggling three television series in addition to his Oscar hosting duties. Notorious for being late, MacFarlane conceded that he didn’t always show up for Emmy rehearsals when he was a presenter on the show last month, and he’s often kept co-workers, studio executives and journalists waiting.