Solange Knowles preparing for return to music with new single, “Losing You” [Video] 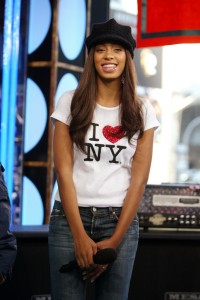 Music fans may have been wondering where Solange Knowles has been since the release of her last album “Sol-Angel and the Hadley St. Dreams,” well if you ask her she would probably tell you that she’s been working on her new style, new look and new sound. Today, she’s preparing for her return to music with a brand new single, “Losing You.”

Knowles has decided to get back to her music roots.

Don’t get us wrong, its been great watching the 26-year-old DJ at the hottest parties, land major fashion campaigns and steal our hearts with her sensational style–but we can’t wait to hear what the songstress has in store with her first album in over three years.

MTV Style caught up with Solange on the set of her new video “Losing You,” which was directed by Alan Del Rio Ortiz and filmed at the Brooklyn studio of contemporary artist Mickalene Thomas.

The singer, clad in a 70s-style skirt suit by Kenzo and blouse by Diane von Furstenberg, reveals that the video is inspired by Thomas’ elaborate installations.

“We used Mickalene’s work as the initial foundation, and built upon our looks based off of her wonderful use of colors, prints and textures. So everything that we’re wearing is a reflection of that,” Solange says.

And for all the “Clueless” fans out there (aren’t we all?), you’ll recognize the “Suck and Blow” game Solange and her pals play during the opening of the video.

Check out a behind-the-scenes look at “Losing You” in the video above.