The number of infected do to the meningitis deadly outbreak reaches 119, including 11 dead 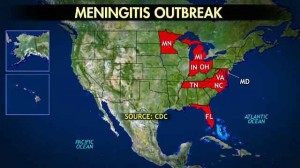 The number of infected do to the meningitis deadly outbreak reaches 119, including 11 dead. According to health officials. Experts said that could be seeing new cases as late as December, two months later after previously thought.

New Jersey became the 10th state reported at least one case, reported the Centers for Disease Control and Prevention. The other states involved in the outbreak are Tennessee, Michigan, Virginia, Indiana, Florida, Maryland, Minnesota, North Carolina and Ohio.

Officials have linked the outbreak of rare fungal meningitis, which in not contagious, to contaminate steroid injections produced by New England. At least 13,000 received medication from the suspected source of illness. Some of the patients have had strokes as a result of the infection. Steroid, commonly used as a spinal injection to treat back pain, from NECC between May 21 and September 25, the CDC said. It is unclear how many of the shots were infected, however. The figure includes not only people who got spinal injections, believed to be most at risk, but also those who received injections in other parts of the body, such as knees or shoulders. At least one contaminated vial was found at the company, in an ongoing investigation by the Food and Drug Administration. 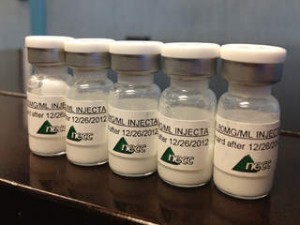 supplied the preservative-free methylprednisolone acetate. Several hundred of the vials, maybe more, have been returned unused, but many others were used. At one clinic in Evansville, Ind., more than 500 patients received shots from the suspect lots, officials said. At two clinics in Tennessee, more than 900 patients — perhaps many more — did.
The company has shut down operations and said it is working with regulators to identify the source of the infection. The company that supplied the steroid in question is what is known as a compounding pharmacy. These pharmacies custom-mix solutions, creams and other medications in doses or in forms that generally aren’t commercially available.
Other compounding pharmacies have been blamed in recent years for serious and sometimes deadly outbreaks caused by contaminated medicines
“Out of an abundance of caution, we advise all health care practitioners not to use any product” from the company, said Ilisa Bernstein, director of compliance for the FDA’s Center for Drug Evaluation and Research.
Robert Cherry, 71, a patient who received a steroid shot at a clinic in Berlin, Md., about a month ago, went back Thursday morning after hearing it had received some of the tainted medicine.
“So far, I haven’t had any symptoms … but I just wanted to double check with them,” Cherry said. “They told me to check my temperature and if I have any symptoms, I should report straight to the emergency room, and that’s what I’ll do.”
At a press conference on Tuesday, Dr John Dreyzehner said those who got the tainted shot might not show symptoms for up to three months later, according to Nashville Public Radio. Officials had thought people exposed to the contaminated steroid were in the clear after a month. Symptoms took on average 16 days to develop, but Dreyzehner said one case took 42 days. So, to be safe, the window for those looking out for symptoms could remain open as long as three months.

Infected patients have developed a variety of symptoms including fever, new or worsening headache, nausea, and “new neurological deficit [consistent with deep brain stroke],” the CDC said in a news release. Some of these patients’ symptoms were very mild in nature. Cerebrospinal fluid from these patients has shown findings consistent with meningitis, the agency said.

The number of infected do to the meningitis deadly outbreak reaches 119, including 11 dead added by gricelda7 on October 9, 2012
View all posts by gricelda7 →

2 Responses to "The number of infected do to the meningitis deadly outbreak reaches 119, including 11 dead"