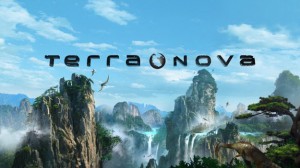 This is Kevin, your source for all the latest t.v. news and reviews. First up is the trailer for the new show called Terra Nova.

Terra Nova centers on the Shannons, an ordinary family from 2149, where the planet is dying, who are transported back 85 million years to prehistoric Earth. The Shannons join Terra Nova , a colony of humans with a chance to build a civilization.

The Terra Nova trailer introduces us to a dystopian future, where the Shannon family wear breathing masks, lining up for “the final shuttle to Terra Nova”-an Avatar like Earth colony set 85 million years in the past. Once they stroll through a bright light tunnel, they arrive in the past at a fenced-in compound that is surrounded by a dense Pandora-like tropical forest and at least one towering waterfall. The Shannon family is greeted by the rugged Commander Taylor (Stephen Lang, the bad guy in Avatar, and yes, you are correctly sensing a trend here).

At first, everything is all prehistoric Blackberry-free bliss. The Shannon family hangs out in their new eco-friendly homestead breathing clean air with solar panels on the roof. Then guns are drawn. Characters get violently yanked from view. Colonists speed off in Jurrasic Park-style armored tumbler trucks. Danger! Excitement! And finally, here comes the show’s tagline: “There is no paradise without sacrifice.”
The trailer has done what all trailers should: it was exciting enough to get someone who likes that sort of thing to watch the show. My grade: (trailer only) A 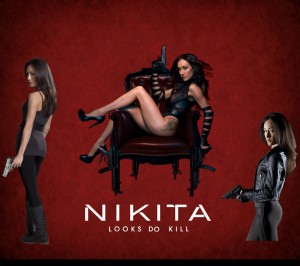 Next is Nikita. Nikita is the story a woman who runs away from the organization that trained her in the deadly arts and now acts to destroy that group. Nikita is aided by Alex, a young woman who acts as a mole inside the organization. The show is based on Luc Besson’s La Femme Nikita, which in turn inspired Hollywood’s Point of No Return. Later came USA Network’s La Femme Nikita (one of the best shows of all time).

Nikita, played by Maggie Q, is the best part of the series. She can handle a gun and she looks good doing it. Maggie is no Jackie Chan, but she still can fight with the best of them. Sounds good, right? Not so fast. Alex, played by Lyndsy Fonseca, is way too young and way too cute to handle a gun or be believable as an a**-kickin’ babe. Alex seems to be added just to satisfy the CW crowd, as none of the previous versions of the movie/t.v. show had the character. Michael, played by Shane West. the object of Nikita’s disdain/affection, can’t hold a candle to Roy Dupuis’ version of the character in USA Network’s show. Will Michael, or will he not, turn and aid her in her objective? Might one of them kill the other? Do we even care? Shane West was never the master of subtlety; just check out his stint on E.R. As with Lyndsy, Shane looks way too innocent to portray a dangerous killer. The always reliable Xander Berkley is reduced to barking out orders to his team of agents. Finally, the O.C.’s Melinda Clarke is a sinister interrogator. Sinister? From the O.C.? Really?

There are other versions of this tale that are far better. If you don’t like the subtitles of Luc Besson’s movie, go with dvds of the USA Network’s show. My grade: C

That’s it for this time. See you later