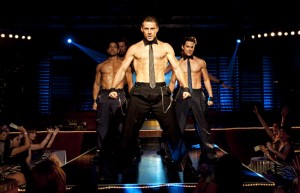 The actor, film producer, dancer, former model, and now Sexiest Man Alive, was given the honor Wednesday when “People” announced its 2012 list.

The actor was selected for his range of work: romance in “The Vow,” comedy in “21 Jump Street” and steamy drama in “Magic Mike,” where he showed off his buff body.

According to NBC’s “Today,” a People representative said Tatum was “amazing” and “astonishingly gorgeous.”

Upon hearing the news, the 32-year-old actor is quoted to have said, “Y’all messing with me.”

Reportedly, Tatum immediately told his wife, actress Jenna Dewan-Tatum, known for her roles in “The Playboy Club” and “Step Up” where she first met Channing.

The 32-year-old actor is training to play an Olympic athlete in the upcoming film, “Foxcatcher”.

His 31-year-old wife told “People” that Tatum is known to be fun and sexy around people, “but they don’t know how emotionally deep and spiritually open he is.” She added, “He is such an open hearted person; what you see is what you get.”

Channing and Tatum have been married since 2009, and according to People, are ready to start a family.

In a recent interview with “People” Jenna implied the couple would be happy this three children.

Tatum graces the cover of this week’s People, which hits newsstands on Friday. The actor joins a long list of Hollywood heartthrobs who also have also received the “sexiest man” title from the magazine including Brad Pitt, Johnny Depp, Ryan Reynolds, George Clooney and Matt Damon.

Meanwhile, Tatum is currently getting in shape to portray an Olympian in the upcoming film, “Foxcatcher.”

And his film career is just heating up. The former dancer/model will also star in “G.I. Joe: Retaliation,” “White House Down” and “21 Jump Street 2,” among other films.

Tatum, who was born and raised in Cullman, Ala., the son of an airline working mom and a construction working dad, has had his share of troubles.

He gave up a college football scholarship as a young’n (he says school bored him) and instead earned a living as a male dancer in Tampa.

According to GQ, Tatum suffers from Attention Deficit Disorder, and something similar to dyslexia.

Indeed, Tatum has overcome so many obstacles to become the sexiest man alive.

But Tatum isn’t just a perfect specimen with good muscle tone, a flirty smile and great hair to die for; at least that’s how Jenna perceives her husband.

As the old adage goes, when you’re hot you’re hot and when you’re not you’re not, and clearly Tatum is hot. The actor not only has bragging rights as People’s Sexiest Man Alive, GQ magazine is featuring him on the cover of their Men of the Year issue for December 2012.