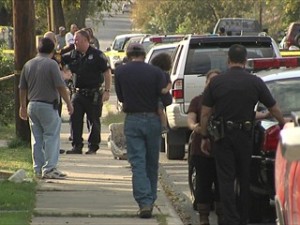 Police were called to a home in the 2000 block of Delgado around 3:00 p.m. Thursday. When officers arrived, a woman was screaming and yelling that her boyfriend, 21-year Ryan Yearley, was dead and was inside a back building on the property. Officers then began searching the building, and found Yearley’s body in a bathtub, faced down, wrapped inside a mattress. Upon further observation, officers discovered apparent gunshot wounds, and the victim showed no vital signs.

Police say the shooting happened around 4 a.m., but officers weren’t notified until about 3 p.m.

They believe the victim lived in the house with his girlfriend and her brother.

Investigators say all three were inside the home when the shooting occurred.

According to police, the Yearly’s mother showed up at the home to look for her son because she hadn’t heard from him since Wednesday night. Police believe that’s when his girlfriend called 911.

Police located Rivera at another location and took him to police headquarters for questioning. Investigators say he admitted shooting Yearley but claimed that he did so in self-defense since Yearley had a knife.