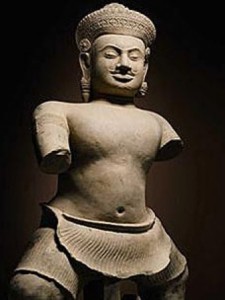 The global financial atmosphere appears to have no effect on Sotheby’s, the world’s largest auctioneers of fine decorative art, jewelry and collectibles. With Mark Rorthko’s ” No. 1 (Royal Red & Blue)” selling for $75 million, Sotheby’s auction of contemporary art is enjoy one of its best years since they were established back on March 11, 1744. The buyer wasn’t disclosed, but The Wall Street Journal reports that the sale went through an intermediary “who typically works with American collectors.”

The sale has come at a time Sotheby’s has been accused by the United States prosecutors of knowingly engaging and encouraging a fraudulent art transaction. Hence, the auctioneers record night appears to have been overshadowed by accusations of deception.

The New York Daily News has reported that Federal prosecutors on Friday filed a motion to amend their forfeiture complaint in the case of United States of America v. A 10th Century Cambodian Sandstone Sculpture, Currently Located at Sotheby’s in New York, New York. The U.S. Attorney’s Office for the Southern District of New York filed the petition in Manhattan federal district court following a September 27 hearing on the claimants’ motion to dismiss.

The government’s case is an attempt to seize, forfeit, and repatriate a statue (the so-called Defendant in rem) offered for auction by Sotheby’s this past spring. Sotheby’s and Decia Ruspoli di Poggio Suasa are the claimants who want the Duryodhana sculpture to remain under their legal control. Both claimants have vigorously contested the civil forfeiture action.

Federal lawyers, in their memorandum asking the court to accept the amended complaint, write that “[at the September 2012 hearing] the Court repeatedly inquired as to the facts the Government expected to be able to prove at trial with respect to the theft of the Defendant in rem from Prasat Chen, and Sotheby’s knowledge that the Defendant in rem was stolen.” The proposed amended complaint and the supporting memorandum filed on November 9 contain the government’s response to the court’s inquiry, supplementing allegations made by prosecutors in their initial April 2012 court complaint.

The government’s latest memorandum contends that the Duryodhana statue “was stolen from Prasat Chen in 1972, with the head removed first and the torso afterwards, and acquired by a well¬ known collector of Khmer antiquities (the “Collector”), via an organized looting network. (Am. Compl. 17-18). The Amended Complaint further alleges that the 1975 sale of the Defendant in rem was conducted for the Collector by an auction house which had full knowledge of its illicit origin. (Id. 19-20).” The amended complaint specifically claims that the Duryodhana and a companion piece, termed “the Museum Statue,” were transited through Thailand. “The heads of the statues were removed and transported first, followed by the torsos, and ultimately delivered to a Thai dealer based in Bangkok (the ‘Thai Dealer’). The Defendant in rem and the Museum Statue were then obtained by a well-known collector of Khmer antiquities (‘the Collector’). At the time of this purchase, the Collector knew that the statues had been looted from Koh Ker,” write the government’s lawyers.

[Author’s sidebar: A companion statue to the Duryodhana has been identified at the Norton Simon Museum in Pasadena, California. Meanwhile, two related statues are located at the Metropolitan Museum of Art in New York. See e.g., PRI’s The World.]

The amended complaint continues with allegations that an officer in Sotheby’s Indian and Southeast Asian Art section “retained a[] professional art scientist (the ‘Scientist’) to prepare a report on the authenticity of the head of the Defendant in rem and the condition of the work done prior to the 1975 sale to rejoin it to the torso. The Officer informed the Scientist that the head had been separated from the torso ‘in antiquity,’ rather than in 1972.” The proposed complaint cites an internal Sotheby’s email that purports to describe the scientist’s observation regarding “the perfect condition of the head compared to the distress suffered by the body.” The email allegedly offers the scientist’s explanation “that the sculpture was either forcibly broken for ease of transport from the find site and then put back together later OR that the head and torso do not belong together.” The government writes that Sotheby’s terminated the scientist.

The government also alleges that Sotheby’s agreed to contact the Cambodian government about the sale of the sculpture but advised that “this communication should not come from the senior Sotheby’s officer” so as not to attract attention.

The claimant’s will have an opportunity to respond to the pleadings filed by the U.S. Attorney’s Office.

Despite these troubles, Sotheby’s auction has fetched $375 million, the company’s highest total ever. Most of the works, including paintings by Jackson Pollock and Willem de Kooning, are from the increasingly popular Abstract Expressionism movement—an indication, perhaps, of longing for post-war US boom times.

Andy Warhol also had a particularly good evening, with seven of his eight works on offer selling for a total of $54 million, well above a high estimate of $45 million expected for that selection, thanks to a well-stocked grouping of his highly desirable “Death and Disaster” paintings. Peter Brant purchased a Green Disaster (Green Disaster Twice) (1963) from this group for $15.2 million, and Christopher Eykyn, of the Upper East Side and London gallery Eykyn Maclean, purchased another featuring the actor James Cagney for the high estimate of $6.5 million, underbidding on a similar piece, The Kiss (Bela Lugosi) (1963), which sold moments before for $9.2 million, setting a new record for a Warhol work on paper.

Ricardo A. St. Hilaire, Esq., CIPM contributed to this article. You can learn more about the author and issues he covers by reading or following his blog at the following link: culturalheritagelawyer.blogspot.com