The Bible predicted End Times, but can we really trust it?

The Bible, the Mayan Calendar, Nostradamus and many ancient cultures predicted an End of Days, but can we really trust something written or created by Man? 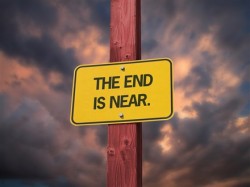 My expertise lies in business, politics and sociology. All three of them are irrevocably intertwined, so it’s a natural fit. I’m not clergy, nor do I really have any “advanced” religious training, outside what I learn on Sundays.

I’m a layman, and yet I’m also a thinking man. Online and elsewhere, I am occasionally accosted by atheists, who want to ask me questions or make blanket statements designed to make me look foolish. “MAN wrote the Bible” seems to be a perennial favorite. Especially among feminist atheists. And honestly, that got me to thinking.

If MAN Wrote the Bible, then your computer is writing this article.

I’m not in your monitor, lighting each pixel. I’m not even sitting in your lap right now, typing at your keyboard. You don’t know exactly where I am, or even if I actually exist as you perceive me. Logically, using reason and facts, it can be effectively argued that your computer alone is responsible for the words you’re now reading. Especially if you’ve yet to grasp the intricate complexities of Internet Technologies. This whole exercise would be deemed supernatural, and dismissed out of hand by your contemporaries.

Have you ever met me? Do you and I have a personal relationship? People who know me can probably vouch for the language, idioms, syntax and overall style, as consistent with what they know of me. If you read a compendium of my written work, you might reasonably deduce that my many-faceted message is consistent, and has remained so for almost 2 decades.

Yet, YOU take it on absolute faith, that a person, possibly named Benjamin Gaul, purported to be a male Caucasian Christian Conservative Capitalist, is the actual author of the words you’re reading on your screen.

But why do you believe that?

You’re probably not aware that I ghost write blogs, for a number of local business people. Timely, industry specific blog posts, written in the personal voice and style of the owners. People whom I have never met, or even spoken to on the phone. One or two of them might know my name. My services are hired out by an agency. In this economy, we do what we must.

Yet, they are MY ideas which everyone reads. Every sentence, phrase, word and punctuation mark originated in MY HEAD. I’m simply utilizing advanced technology – created specifically for the task – to deliver my message to whoever wants to read it. It doesn’t bother me at all that the people who read my posts believe them to be the thoughts of others.

Is it really such a big stretch to understand how a Creator might be able to use His creation to put His thoughts and desires into print? 200 years ago, saying that Man wrote the Bible might have been difficult to argue. Today however, we can bounce our ideas off of crude technological devices we’ve put in orbit around our planet, and not even blink. And human beings are vastly more sophisticated than anything we’ve cobbled together so far.

The Bible is a collection of 66 books, written over a roughly 1500 year period by some 40-odd authors:

Shepherds, farmers, tent-makers, physicians, fishermen, priests, philosophers and kings. Despite these differences in occupation and the span of years it took to write it, the Bible is an extremely cohesive and unified book. Almost as if there were a Guiding Force behind the pen of every person in that list.

Many prophesies made in some of the 39 Old Testament books, such as where the Savior would be born, into what family, specifics about His life and how He would die (nailed to a “tree”), came to fruition in the New Testament. Try predicting the life, lifestyle and death of someone who won’t be born for a thousand years. Any idea what the odds are you’ll get even one fact correct? There might not even be life on the planet by then.

The places and the people in the Bible are just as real as Alexander the Great, Julius Caesar or any other well known historical episode. In fact, we have more accurate historical data on Jesus’ life and deeds, than we have of Julius Caesar.

There are a great many non-Biblical, non-Christian authors, contemporary to the New Testament authors, whose writings corroborate people and events sited in the Bible:

–Suetonius (c. 70 A.D.) wrote (under emperor Hadrian) about the lives of the Roman Caesars

–Plutarch (c. 70 A.D.) – Roman-Greek historian who wrote on almost everyone (From Alexander the Great to Augustus)

–Pliny the Younger (c. 110 A.D.) Roman governor who wrote many letters to his emperor Trajan

Josephus on James, brother of Jesus:

“Festus was now dead, and Albinus was but upon the road; so he assembled the sanhedrim of judges, and brought before them the brother of Jesus, who was called Christ, whose name was James, and some others, [or, some of his companions]; and when he had formed an accusation against them as breakers of the law, he delivered them to be stoned…”

Clearly, Jesephus does not accept that Jesus is the Christ (“who was called Christ”).

Josephus does however confirm that Jesus existed. Jesus had a brother called James (see Galatians 1:18-19), and James died for a religious cause.

“But now Pilate, the procurator of Judea, removed the army from Cesarea to Jerusalem, to take their winter quarters there, in order to abolish the Jewish laws.”

A procurator is a person who manages the affairs of another by virtue of a charge received from him (in this case, from the Roman Emperor)

Luke 3:1 says “Pilate was the governor of Judea.” A Governor takes care of a place on behalf of the Emperor.

“Now there was about this time Jesus, a wise man, for he was a doer of wonderful works, a teacher of such men as receive the truth with pleasure. He drew over to him both many of the Jews and many of the Gentiles. And when Pilate, at the suggestion of the principal men amongst us, had condemned him to the cross, those that loved him at the first did not forsake him. And the tribe of Christians, so named from him, are not extinct at this day.”

There are a great many more corroborative writings, but for brevity’s sake, I’ll stop here.

The Bible puts accounts in historical perspective, giving us the context in which they actually happened. It is by no means a legend, nor is it fairy tales. Calling it such only proves ignorance, willful or otherwise.

We, as a species, do not even yet know what ELECTRICITY actually is! Yet we can create it, store it and use it, and yet still we are clueless as to it’s structure or make-up. If the people and places in the Bible which we can verify consistently prove out, is it “illogical” to allow the possibility that the things in the Bible which we cannot check, are also truthful?

Or are you going to insist, by reason and logic, that your computer wrote this article?

But, if God did indeed write the Bible, what does it hurt to learn what He had to say about the End of Days?

The Bible predicted End Times, but can we really trust it? added by Ben Gaul on November 21, 2012
View all posts by Ben Gaul →