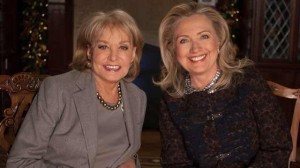 While interviewing with Barbara Walters, Secretary of State Hillary Clinton stated that she is “exhausted” and doesn’t want to run for President in the 2016 election. This comes despite speculation that has grown to the point of being a general assumption that she will throw her hat in the ring.

Clinton suggested that she might prefer to explore philanthropic or academic interests – after taking some time simply to relax.

I just want to see what else is out there. I’ve been doing this incredibly important and satisfying work in Washington as I say for 20 years. I want to get out and spend some time looking at what else I can do to contribute.

This will not end speculation about Clinton’s intentions, nor efforts to convince her to change her mind. Both Democrats and Republicans understand that Clinton would be a formidable candidate, and indeed the presumptive Democratic front-runner, should she choose to run.

If she does not run, she would join a small roster of candidates presumed to be front-runners. Her husband, ex-President Bill Clinton, was himself a little-known Governor of Arkansas who benefited from a field of challengers that did not include several potential candidates with higher profiles, including New York Governor Mario Cuomo. Ironically, Secretary of State Clinton’s decision, should it hold, would make Mario Cuomo’s son, current Governor Andrew Cuomo, one of the front-runners for the Democratic nomination in 2016.

A New York Senator from 2001 to 2009, Hillary Clinton ran for President in 2008, and was nearly as favored to win the Democratic nomination, and indeed the Presidency, as she would be favored in 2016. In the 2008 campaign she was defeated by Illinois Senator Barack Obama, who was even less well-known than her husband Bill Clinton had been in 1992. Despite a campaign wracked with bitterness, Clinton and Obama reconciled after Obama’s victory, and Obama selected Clinton to serve as his Secretary of State. Secretary Clinton, now the most-traveled Secretary in American history, would bring a far more impressive resume to a 2016 candidacy than she brought to 2008. In 2008 she was still known primarily as having been Bill Clinton’s First Lady – a somewhat unfair judgement even then, as she was all but a Cabinet officer during the Clinton Administration, with primary responsibility for that Administration’s admittedly unsuccessful healthcare initiative. 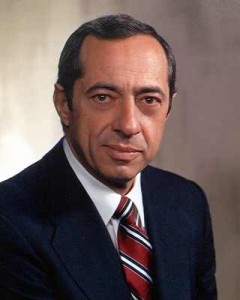 NY Gov. Mario Cuomo, presumptive front-runner in 1992, who chose not to run for the Presidency

There is some controversy surrounding the end of Clinton’s term as Secretary of State, all of it surrounding the Benghazi, Libya tragedy in which, on September 11, Ambassador Christopher Stevens, U.S. Foreign Service Information Management Officer Sean Smith, and embassy security officers Glen Doherty and Tyrone Woods were killed during an Islamist attack. It was later discovered that Stevens had frequently requested additional security, as the embassy outpost had come under attack in the past. Several other Western nations had in fact withdrawn their Embassies because of precisely such security concerns.

The Administration response to the Benghazi attack was widely criticized for offering inaccurate rationales for the attack and concealing important information. Secretary Clinton said, on September 26, that the attack might be linked to the Al-Qaeda in the Islamic Maghreb terrorist organization, and that the “buck stopped” with her as Secretary of State. This launched speculation that she was attempting to deflect the attention from President Obama, who was then engaged in – some would say preoccupied by – campaigning against Republican challenger Mitt Romney.

Should Clinton change her mind, run for office, and win, she would become the first woman to serve as President. Should she not run in 2016, she would be 74 years on Election Day 2020. 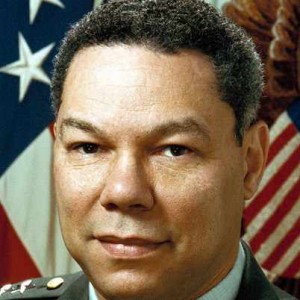 Gen. Colin Powell, presumptive GOP frontrunner in 1996 and 2000, who chose not to run for the Presidency

One Response to "Barbara Walters : Hillary Doesn’t Want to Run in 2016"