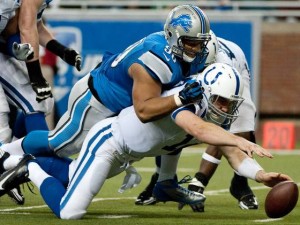 Yesterday the Detroit Lions once more proved they were losers. But I’m not talking about their last second defeat by the Colts.

After an interception by Don Carey, Ndamukong Suh buried Colt’s right tackle, Winston Justice during the return. Whether the hit was legal or not was not the issue. Justice received a concussion and had to leave the game.

Colts guard Mike McGlynn told Indianapolis Star columnist Bob Kravitz that while he was still lying on the ground, Suh and other Lions players were standing over him laughing and dancing.

This behavior is unacceptable. Football is a dangerous game. Players are very aware that injuries occur, and could happen to any one of them at any time. Generally players are concerned when one of their own, same team or not, is injured. But most players never intentionally cause bodily harm to another. This is not the case with Suh.

The Lions are the bullies of the NFL. It starts at the top. Head coach Jim Schwartz needs to show leadership, instead he considers actions by Suh and others acceptable.

The Lions are not a very good team. But they could act like good human beings. If they put the energy they use trying to be the “bad boys” of the league into their play on the field, they might win a game once in a while.