Number 2, Alabama was in Atlanta to face Number 3 Georgia, an extraordinary game 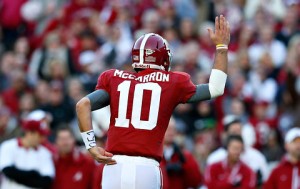 I believe I just watched the national championship game in college football.

Number 2, Alabama was in Atlanta to face Number 3 Georgia. The winner would play Notre Dame for the National Championship. The game was in doubt until there were only 4 seconds left on the clock. Georgia’s quarterback, Murray, completed a pass to the 4 yard line, but they had no timeouts and the game was over. The final score was 32-28, but that’s not the story.

Alabama earned the right to defend its National Championship against the Irish. I seldom say this, but neither team deserved to lose this game. It was everything a football fan sits in front of their television for 3 plus hours to see.

I am in agreement that the SEC is the toughest and best conference in college football. Georgia’s quarterback, Murray, was the more accurate passer, but when it was necessary Alabama’s McCarron threw a touchdown pass that put them in position to win the game.

The running backs were extraordinary. For Georgia, running back Todd Gurley was terrific, especially in the second half. Georgia was behind 10-7. Gurley wove and powered his way through the tough Alabama defense. He ran for 23 carries and 120 yard with two touchdowns. But it wasn’t enough. Lacy of Alabama ran for 20 carries, 184 yard and 2 touchdowns. Alabama’s Yeldon carried 25 times for 151 yards and 1 touchdown.

On both sides there was great defense, and sometimes better offense. There were fumbles, interceptions, sacks, and blocked kicks. There was awesome individual play, and even better team play.

At the beginning of the game the announcers said it would be a 15 round “prize fight”. They were not wrong.

From what I saw tonight, I cannot believe that Notre Dame could win against either one of these teams. But, as the “swammy” always says, “that’s why they play the games”.