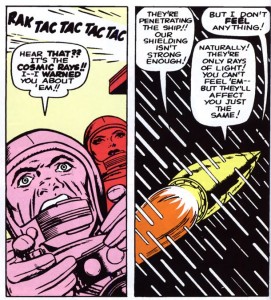 Since what used to be called the Dawn of the Space Age, NASA scientists have feared the consequences of astronauts’ exposure to space radiation. The most recent news is that cosmic ray exposure can lead to central nervous system damage that, in turn, can lead to the development of Alzheimer’s disease.

Solar flares are dangerous enough. We know that the Apollo astronauts were extremely fortunate in the timing of their missions. A massive solar flare erupted just before the Apollo 17 mission that, had it occurred while astronauts were out and about collecting moon rock samples, would have killed them instantly, not at some later point in life. But ordinary shielding provides good protection against solar radiation, and NASA has experience integrating specially reinforced chambers into its spacecraft in case of solar flares. It also helped that the Apollo missions were relatively short.

Now, however, we are turning our attention to asteroid missions and, eventually, Mars. Material shielding against cosmic rays doesn’t yet exist in a way that is practical for spacecraft. In his 1977 book The High Frontier, addressing the challenge cosmic rays pose to space colonies – necessarily permanently located in space, and necessarily above the Earth’s protective magnetosphere – had to resort to surrounding the enormous craft with a six-foot thick crust of slag from the Moon. This fact gives a graphic idea of just how powerful cosmic rays are.

Cosmic rays don’t derive from solar eruptions but from the general cosmic background. Their ultimate origin is not the periodic eruption of stellar surfaces, but supernovae and other massive cosmic events. The cosmic rays released by these events are of various kinds, but the type NASA is concerned with is composed of heavy atoms, such as iron atoms, that have been stripped of their electron shells and are now highly charged. Because of the number of their sources, they come from all directions; because of the vast number of sources, they are constant, and cannot be anticipated simply by observing an event like a solar eruption.

When we are told that nothing can stop high-energy, high-mass cosmic rays, this applies to conventional material shielding. Obviously, we are not being fried by these particles here on Earth, because, while the Earth lacks any material shield aside from the atmosphere itself, we are protected by the powerful magnetosphere.

The magnetosphere, discovered in 1958, is an enormous feature of our planet, reaching a quarter the distance of the Earth to the Moon. It is composed of ions and electrons trapped in the Earth’s magnetic field. A plasma, it has no fixed position but varies according to the solar wind. The side that faces the Sun, the magnetopause, “precedes” the Earth by as much as 70,000 kilometers.

Given this, the obvious solution to the problem of protecting humans in space is to do it the way we are protected on Earth. We know that it is possible to create an artificial magnetosphere. This was accomplished by Robert Winglee of the University of Washington, inventor of mini-magnetosphere plasma propulsion (M2P2) .

In the late ’90s there was great excitement about M2P2 as form of “space sail” – in other words, as a propulsion system – and the technology received funding from the NASA Institute for Advanced Concepts. A spacecraft enclosed in an M2P2 “bubble,” pushed along by the solar wind, should be able to reach Mars in as little as three months. The emphasis on M2P2 quieted as both Federal interest in a Mars mission and Federal funding for advanced physics fizzled. Ironically, in the small community of alternative space propulsion systems, this ion-deflecting system also seems to have been superceded as an advanced propulsion system to a rival, ion drive. Ion drive has already been used used successfully in space by the NASA Deep Space 1 and Dawn probes, as well as by the European Space Agency’s SMART-1 satellite.

M2P2 was always understood to have potential as a form of radiation shielding, but that application tended to remain in the background, almost as an asterisk, behind its propulsion application. It’s akin to the 19th century, when John D Rockefeller became fantastically wealthy as an oil baron while his refining process produced lakes of a useless by-product: gasoline. Perhaps now the time has at last come for M2P2’s radiation shielding potential to step into the foreground.

This will not be a slam-dunk. Launching an M2P2 system large enough to hold a spacecraft in a “cavity” might not be easy, but it is likely to be easier than launching enough lead or concrete to encase the craft in six feet of concrete.

If only astronauts exposed to cosmic rays simply gained super-powers, instead of developing Alzheimer’s. Alas, this is unlikely. Our only hope is to protect them. 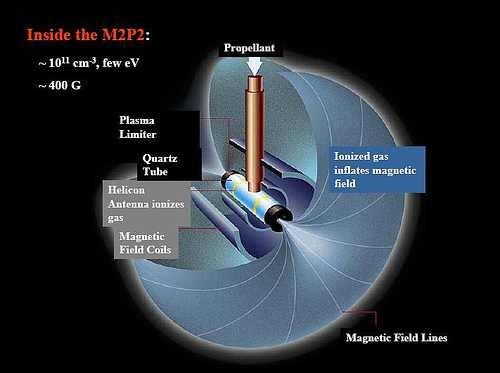