Notre Dame and the Crimson Tide of Alabama Title Game

Get Ready for Some Football 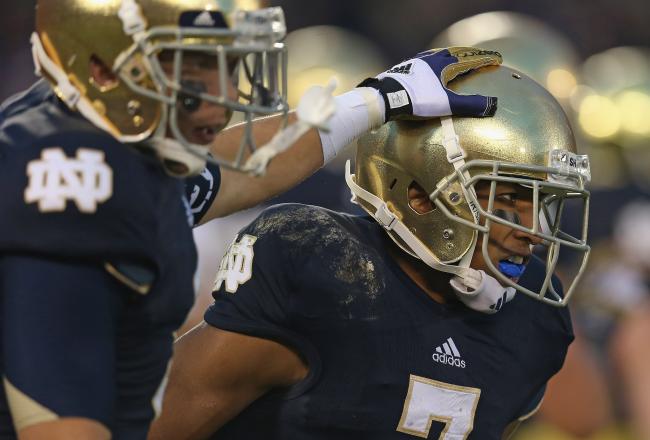 This is Monday, January 7th. There is a Monday night football game, but it’s not the NFL. The National Championship Game between the Fighting Irish of Notre Dame and the Crimson Tide of Alabama will kick off at 5:30, PST.

The Irish are ranked number one in all polls and the BCS, boasting an undefeated record of 12-0. Coach Brian Kelly has returned his team to the national spotlight. Linebacker Manti Te’o was runner-up for the Heisman, and a true leader on Defense.

Alabama, under Nick Saban, began the season ranked number two, until USC faltered. Their final record was 12-1. They held the number one ranking until Texas A&M and “Johnny Football”, the eventual Heisman Trophy winner, upset them at home. They are led by quarterback A.J. McCarron, and a running back duo of T.J. Yeldon, a true freshman. and Eddie Lacy, a junior.

Whether they win or lose tonight, it’s good for fans and good for college football to see the return of the Irish. They struggled for almost two decades to play the kind of football that challenged every opponent, and gave them ‘legendary’ status. Throughout the 2012 season sportswriters doubted them. Early in the season, they defeated Michigan in a close game, 13-6. In mid-season, they defeated Rose Bowl champion Stanford in overtime 20-13 at home. The final score in over half their games was very close. They were seldom dominant, but they showed the ‘heart of a champion’ and found a way to win.

Alabama, playing in the toughest division in football, the SEC, crushed Arkansas and Auburn, and defeated rival LSU in Baton Rouge by the score of 21-17. Notre Dame’s defense will need to be at the top of their game to slow down the Tide’s running game.

It should be fun. I will be ready for what is always one of the best games of the year. Although I believe college football’s championship format needs revision, the teams that reach the BCS final are usually very competitive.