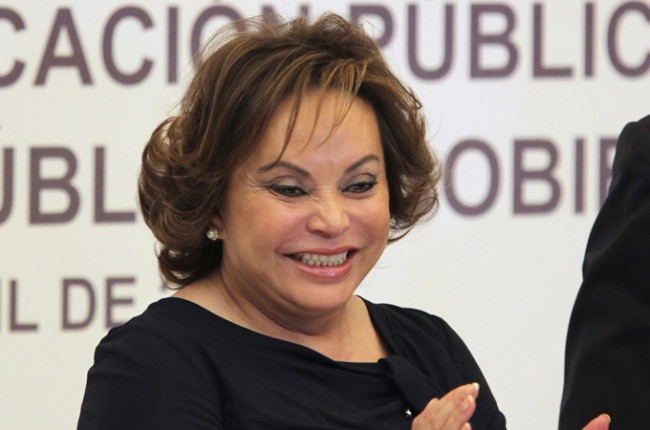 Some of the money was wired to accounts in Switzerland, he said, while other funds were used on plastic surgery. Some $2.1 million was spent at the Neiman Marcus store in San Diego, Calif. Authorities arrested Gordillo, 68-years-old, when she arrived near Mexico City on private jet from San Diego.

Her detention marked a singular strike against the chief of a union that was once a pillar of support for the Institutional Revolutionary Party (PRI), and comes at a crucial early stage as President Enrique Pena Nieto, a PRI member who took office Dec. 1, seeks to enhance his public support.

According to official sources, the union leader-silent today will spend the night in the prison of Santa Martha and tomorrow is expected to first appear before a judge.

After the press conference, where the Attorney General of the Republic, Jesús Murillo Karam, announced the arrest at the airport in Toluca, the “moral leader” of the National Union of Education Workers (SNTE), the Secretariat of the Prison System confirmed the entry of that Gordillo Morales detention center.

“Clearly, we’re facing a case in which the money of education workers has been misused illegally for the benefit of various people, including Elba Esther Gordillo,” Murillo said. “Under this government nobody is above the law.”

Opinion polls often rank Gordillo as the least popular of major political figures in Mexico. While not holding elected office currently, she has been both a senator and deputy in Congress. She’s widely blamed for an educational system that has kept Mexican children scoring lower on standardized tests than most other countries of its size or importance

Under Secretary, Mayela Almonte, headed the operation in Santa Martha, and indicated that “Master” has guaranteed all their rights and safety.

Furthermore, sources reported that the prison system would be on Wednesday February 27 when Elba Esther Gordillo is filed with the Court 6, located in the Eastern Prison in Mexico City.

Gordillo appear before the Judge of Federal Criminal Proceedings Sixth, as the authority that delivered the arrest warrant against him. “The Master” will be presented at the grid to examine him practice school.

Murillo said she used union money to pay bills of $3 million at luxury U.S. department store Neiman Marcus. Detailing the charges against her, Murillo said she had declared income of just 1.1 million pesos ($86,000) between 2009 and 2012.

He said other people involved in the suspected fraud included Gordillo’s dead mother, the 99 percent owner of one of the companies used to move funds.

Prior to his transfer to the Women’s Center for Social Rehabilitation of Santa Martha Acatitla staff of the Deputy Human Rights PGR underwent a medical examination to verify their physical and hand deliver information to the judge who ordered his apprehension.
Gordillo was a heavyweight of Mexican politics and at one point led the PRI in the lower house of Congress. She quickly thwarted government efforts to decentralize education, give parents a bigger role and weaken the union.
But she fell out with PRI leaders ahead of the 2006 presidential election and founded the small New Alliance Party.

Gordillo was detained at Toluca airport near the capital on Tuesday evening along with three other people; Murillo said auditors had traced “only 10 percent” of the money that may have been siphoned off from union accounts.
Three other union officials were arrested in addition to Gordillo, he said.