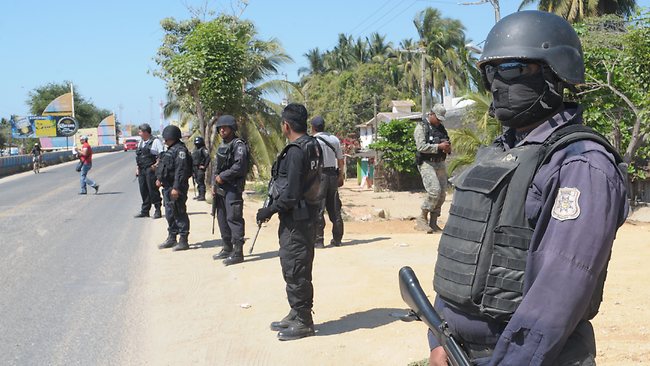 An armed group of men burst in the room where six Spanish tourist to sexually abuse them in the middle of the night roughed up their companions and made off with cash, laptops and other valuables, authorities said. The attack happen early Monday on what was in Mexico a long holiday weekend came as the one-time tourist mecca struggles to salvage its reputation.

According to Attorney General of the State. A Mexican woman was also in the place was not attacked by the attackers, said Walton. Walton declined to give details of what specifically happen since the incident is under investigation.

What happen to the Spanish tourist is “responsibility to us, the municipality (Mexico), the state government (Guerrero), and is the responsibility of the Federation (Mexico) because we have to provide security,” he added.

According to the newspaper Reforma, the tourist who were staying in a beach bungalow located in the eastern Bonfil in Acapulco, Guerrero, were attacked by at lease 10 people who had their faces covered.

Menwhile, Melenio Diario reported that the attackers were six, which stripped him of his belongings to once they committed the violation. The municipal government has agreed to support all the necessary investigations already performed by the Attorney General of the State.

At the present times not arrest had been made in connection with the facts but hopes that “within days the case is resolved. Acapulco’s mayor said during the press conference in which he considered that these events occur worldwide.

“It is very unfortunate what has happened, but hey, it happens anywhere in the world,” said the mayor.
Finally, Walton Aburto acknowledged that this event will negatively affect the image of the destination.
“This we jumped, we were recovering well. Tourist season in Acapulco December was excellent (…) And of course, it hits us and is very unfortunate,” he added.

Acapulco’s Mayor also told reporters that aggression in unfortunate for the tourist. However his comments caused outrage, the mayor felt his words are taking out of context and he never try to minimize the facts. “My words were never intended to hurt the victim, we gave away the face “he said and he apologized for saying that rape is an act that happens to tourist worldwide.
Luis Aburto mayor of Acapulco, Mexico who described the event as “very unfortunate” and damaging to the city said, “ We have to get the criminal buy all way and any means.”

The Spanish women and their partners rented the villa a few days ago call Babaji at the height of the area know as Playa Encantada, Barra Vieja on the road, in an area that leads to the region call Costa Chica of Guerrero in south Mexico.

Meanwhile general consul of Spain in Mexico, Miguel Angel Fernandez de Mazarambroz, has moved to Acapulco to meet with the Spanish tourist. Sources form the Ministry said that diplomatic and consular representatives are providing the “relevant assistance” from the moment he became aware of the facts and following the case in continuous contact with Mexican authorities who are investigating the incident.

The identity of the victims has remained under the anonymity.

A group of the vigilantes opened fire over the weekend on two Mexican tourists headed to the beach who failed to stop at one of their impromptu roadblocks. The pair was injured but survived.

The U.S. and Spanish governments last year issued warnings advising extreme caution while traveling in Acapulco. The Mexican foreign ministry Tuesday expressed regrets for the rapes and said Spain’s consul general, based in Mexico City, had traveled to Acapulco to assist the victims.

One Response to "Six Spanish tourist rape in Acapulco Mexico"