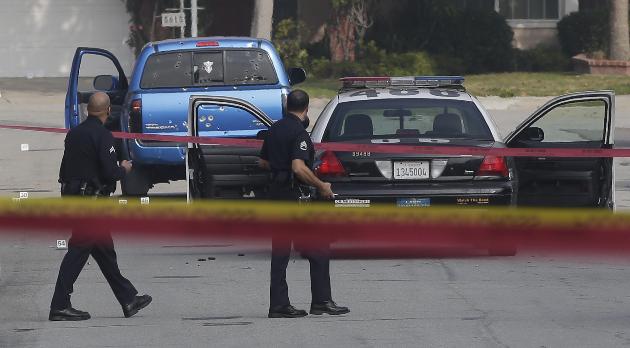 The Newspaper delivery woman who got shot and wounded by Los Angeles Police Department during the manhunt of ex-officer Christopher Dorner received $40,000 for truck. According to their attorney “they’re not doing well” he said in a news conference to announce a resolution to the loss of their bullet-riddled pickup truck.

The agreement with the women was reached relatively quickly, Trutanich said at a news conference Thursday. The tax-free settlement covering the pickup and other property came quickly after the women’s attorney, Glen Jonas, rejected Los Angeles Police Chief Charlie Beck’s offer of a replacement truck because the women would have had to pay taxes. The deal specified no admission of liability.

LAPD Chief Charlie Beck publicly apologized and promised them a truck to replace their blue Toyota Tacoma but an attorney representing them said this week that the women had yet to receive the vehicle. “We reached an agreement relatively quickly and got through some very, very troubling issues,” said LA city attorney Carmen Trutanich.

Margie Carranza and her 71-year-old mother, Emma Hernandez, were delivering papers around 5 a.m. Feb. 7 when LAPD officers guarding the suburban Torrance home of a Dorner target blasted at least 100 rounds into their Toyota pickup. Hernandez was shot in the back and Carranza had minor injuries.

Attorney Glen Jonas said. “Margie is still very emotionally impacted by what happened. Emma is suffering as far as her injuries are concerned.” Hernandez was shot twice in the back, and Carranza suffered injuries from broken glass, CNN affiliate KTLA reported.

The terms of the agreement reached Thursday includes a non-admission of liability by either party and a full release of the truck to the city that now legally owns it. Attorney’s fees totaling approximately $25,000 are also being waived as part of the settlement.

“As you can imagine paying part of a claim would seem to imply liability on the part of the city for making that payment,” he said.

The women were expected to receive the money in two to four days.

The attack on the women’s pickup truck wasn’t the only mistaken police shooting that morning in Torrance. Moments later, nearby local police opened fire on a pickup truck driven by a surfer heading to the beach.

Dorner died February 12 while holed up in a cabin that caught fire when police fired tear gas canisters into it. Days before, he had killed four people and wounded three others as part of a vendetta against his former comrades before apparently taking his own life in the cabin.

Dorner was on the run in a Nissan Titan pickup after being named as the suspect in the murders of a retired LAPD captain’s daughter and her fiance. The former captain had represented Dorner at an LAPD disciplinary hearing that led to his firing. The double-murder investigation led to discovery of a manifesto posted online by Dorner that vowed to wage war on Los Angeles police.