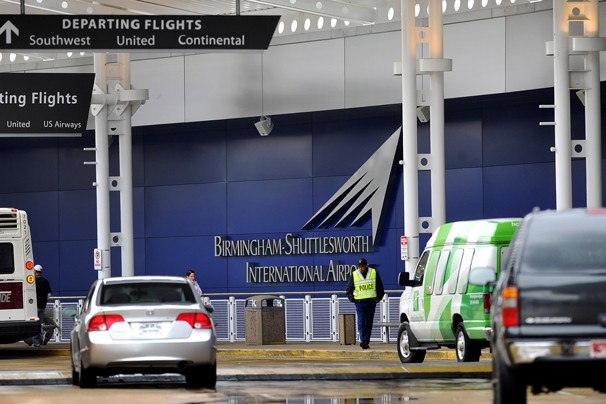 Walking through an airport seems like a relatively safe and uneventful event.  It should be, unless an airport sign falls on you and your 10-year-old son, and he dies because of the incident.

The Bresette family had spent a vacation on the beaches of Destin Florida, and were going home to Kansas City when a display board came crashing down on them.

The crushing weight of the digital sign killed 10-year-old Luke Bresette and left his mother, Heather, in critical condition at a Birmingham hospital.   The accident happened inside Alabama’s Birmingham-Shuttlesworth International Airport.

The airport had been reopened on March 13th as part of a $201.6 million dollar renovation.  Passengers are now voicing their concerns about the safety of the construction.

What caused the large digital sign which showed when and where flights were arriving to and departing to collapse around 1:30 p.m. (2:30 p.m. ET) Friday?  Authorities are not sure.

Gaynell Hendricks, the chairwoman of the authority’s board said airport authorities are working with police and FBI to ascertain the cause of this tragic incident.  She said:  “This includes discussions with contractors, subcontractors that are responsible for the modernization of the … airport.”

According to CNN affiliate WVTM, the area opened up March 13 and includes a covered parking deck, children’s play area, eating establishments, a new baggage system and other features.  It is prior to the security checkpoints.

Larry Snyder was riding up the escalator when he saw the display board fall, telling CNN affiliate WIAT that one family was especially affected.

“The family was crushed, little kids crushed underneath the sign. And everybody was scattering to lift it up,” Snyder said, adding that he was among those who helped.

Ryan Bresette, had posted pictures of his family vacationing on the Florida shore.  After being notified of the accident, his final post read:  “I miss and love Luke so very much.”