Two Canadian Men Escape Jail With the Aid of a Helicopter 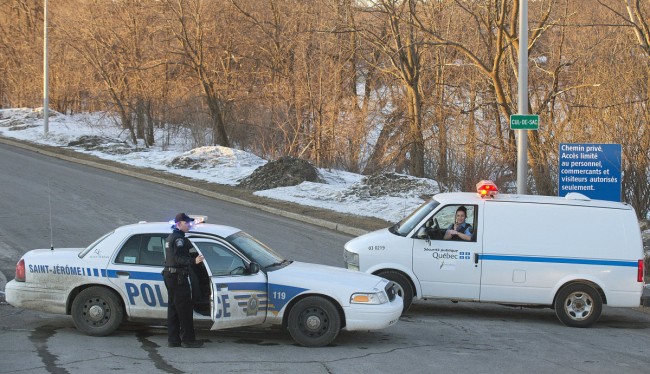 CBC News is reporting a story about two men who escaped from a Saint-Jérôme, Que. jail in a helicopter, according to Radio-Canada.

Radio-Canada reporter Jean-Philippe Ouimet told CBC that the helicopter hovered over the building, and the two men climbed aboard with the help of a rope ladder.

The helicopter was found around 3:30 p.m. in a wooded area near Entrelacs, a few kilometers northeast of Saint-Jérôme in the Mont-Tremblant area, but only the pilot remained..

Police said he was taken to an area hospital to be treated for shock.

Hudon-Barbeau is alleged by police to have ties to the Hells Angels, Radio-Canada reported.

The search for the escapees is taking place near Argile Lake.  Police have set up a perimeter, surrounding the area.

The Sûreté du Québec are talking to the pilot of the helicopter.

“He’s going to be questioned later on by investigators … within the next couple of hours,” Sgt. Benoit Richard said, adding that it’s too early to say what the pilot’s role was in the escape.

The jail had been the scene of a riot by about a dozen prisoners a little over a month ago. Police surrounded the building while prison staff subdued them with pepper spray.  The jail holds about 480 inmates.