Chinua Achebe Left A Gift “May God fight on my behalf” 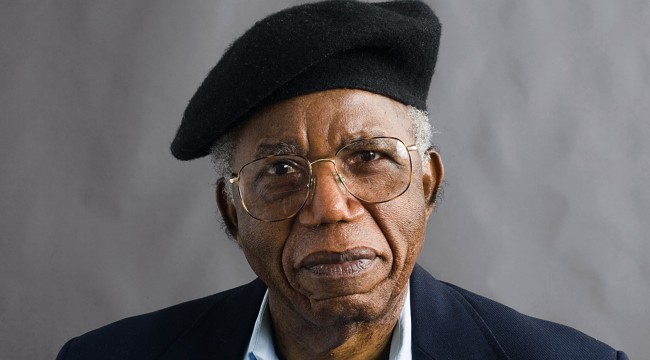 Chinua Achebe left the world a priceless gift by simply living a life true to his favorite idiom; “May God fight on my behalf.” Such words vividly echo from his image above as it  personifies contemplative questioning, and understanding.

Chinua Achebe isn’t someone I knew a lot about, I was ‘aware’ of him. But was not familiar with his work. That was until I started this article. But with research came respect. He made me realize that a large part of humanity owes him a level of debt and gratitude. And it’s sad that a good portion of humanity have no knowledge of his personal accomplishments. I’m not necessarily talking about his novels, children’s books or short stories, but for the man he was. There are very few souls like him around. And that is what we should celebrate; the gift he left in his passing.

We need to celebrate that we had him with us, teaching us, questioning us and asking us to keep questioning ourselves. I realized very quickly that he indirectly contributed to the way I think. I owe him a level of respect for that. I’m also saddened that I missed out on being involved in his path while he was here. My loss.

Chinua Achebe had a privileged, yet, challenging upbringing. He was privileged because he had so many of the right type of people around him that noticed he had an exceptional gift. I’m not necessarily talking about his teachers, I’m talking about his father who challenged him and made sure Achebe knew and respected his heritage, which he eventually embraced.

Currently, there are many articles revealing who said what in regards to his passing. And what a great loss Chinua Achebe’s passing is. I agree, he represents a great loss, but I don’t want to waste your time telling you stuff you already know.

I would like to share how I feel he has contributed to the way I think about my life, purely from researching him. I can only imagine how immensely proud his family felt about his accomplishments. I am of his children’s generation. Therefore, my parents grew up probably hearing about him in the news or on TV. They may have even read his books. I don’t know for sure, but what I do know is this, he was lucky to be published at all. It nearly didn’t happen because of a typing service he sent his first manuscript to. He’s even remarked, that if it didn’t get published he probably would’ve just given up.

Can you imagine if he hadn’t of been around as an influence in our world? That’s scary when you think that could’ve happened purely because of bias, racism or blatant incompetence. Think about who has come across your path that you were less than accommodating to their passions or beliefs. It just goes to show, that you never know.

He dealt with many things that native people deal with every day. But they don’t have the platform that he managed to procure with very hard work. It’s easy to see who this man was. He didn’t hide behind politics, although they tried to manipulate him. He had the courage to do what many of us don’t do today, he walked his own path, and damn the consequences. He stayed true to who he was.

Ok, so how has writing this article influenced me, now that I know a bit more about who this man was? I grew up in a white middle class environment. And even though I wanted for nothing, in terms of ‘stuff’, I was lacking in what Chinua Achebe had, love of his family, and support from his father to reach the highest of heights.

When your child is offered a medical scholarship and turns it down to follow his passions, that takes courage, even now. Furthermore, giving up that scholarship meant he had to pay his own way. His family found a way, he got a government grant for bursary, his family donated as much as they could, and his brother gave up the money he usually saved to get home for holidays in a collective effort to help pay Chinua Achebe’s tuition fees.

That is incredible dedication. Money wasn’t easy back then. You think we have it hard now, try getting by back then, and paying tuition fees. Accomplishing what he did put him on a collision course that would eventually inspire writers like me. Chinua’s life delivered a strong message of ‘follow your passion;’ share what you know. That’s what life is; learning about our world and how we play a part, how we can improve and leave this world a better place. By teaching through example, Chinua Achebe successfully imparted this gift to us all.

It’s a well known fact that he was an all around successful author, across several genres, who never gave up against injustice, widespread oppression and corruption in society. He captivated his audience, with simple non-pretentious content, as well as inspiring generations of African writers who can now take pride in writing about their cultures.”

He suffered no fools, didn’t speak much, but when he did speak, the literary world and governance listened. He had such an influence about him and an unwavering honesty about humanity.

What I find incredibly interesting about Chinua Achebe’s life, is that he was destined from birth to change his world and the thoughts and attitudes of many. Did you know that Chinua Achebe is his abbreviated name? His birth name is Albert Chinualumogu Achebe; ‘Chinualumogu’ means “May God fight on my behalf.” It was a prayer set to give him divine protection and stability. Little did the Achebe family know what message they would send to the universe?

So, what I took from everything I consumed about Chinua Achebe, I concluded that, in my opinion, his 10 ways to celebrate life may have been:

1) Embrace and enjoy the traditions your village/community offer.
2) Share what you know, share it all
3) Be free spoken, open your heart (different from speak freely)
4) Share the truth of your beliefs
5) Share your pain, your disappointments- from that you will grow
6) Be passionate about your beliefs, it will continue to inspire you and those around you.
7) Stand up and be counted
8) Respect your traditions; they are the making of you.
9) Work hard, but remember to play
10) Be honest with yourself most of all, and the rest will follow

RIP, my condolences to his family and village.

Chinua Achebe Left A Gift “May God fight on my behalf” added by gricelda7 on March 23, 2013
View all posts by gricelda7 →