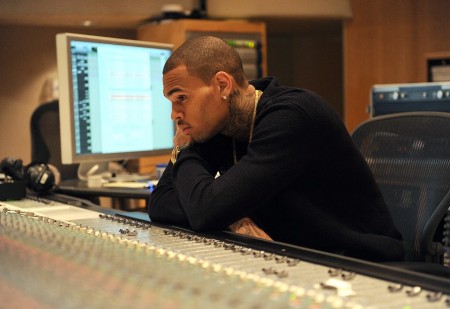 With his sixth studio album just months from release, Chris Brown has been busy recording and finishing up his album. His album ‘X’ is set for an August 2013 release and is shaping up to be another hit for Breezy as he has gone back to the mentality he had with his first album. Also, on his album ‘X’ Chris was influenced by the likes of Michael Jackson, Sam Cooke and Stevie Wonder.

Chris did not want to create a pop sounding album but instead go back to his R&B and hip hop roots on ‘X.’ Chris admits that before he was signed he tried to get signed as a hip hop artist but after the label heard him sing they said he should sing instead.

On his album ‘X’ Chris opens up and speaks his mind, after going on a rant via his instagram and the twitter beefs that occurred last year. Chris has since deleted his instagram and only occasionlly has he tweeted, he chooses to voice his thoughts through his music; “I think it’s smarter as an entertainer and as a leader. I have to think logically. When I’m too attainable, it makes me too down. Now I express it through my music and through my paintings as well. What I want to talk about comes out, and the beat fills in the rest. All of it coexists with my reality now. I’m an open book. I think the way my life is, people want to know all the time, so I have to let them know through my music.”

Recently, Breezy played some of his as yet unreleased tracks from his album ‘X’ and from his first single ‘Fine China’ to the title track ‘X.’ Chris has created something special, as for features Breezy has not spilled all the beans but fans can expect Chris to collab with hip hop star Kendrick Lamar on the track ‘Autumn Leaves.”

Also, Chris recorded another collaboration with girlfriend Rihanna, Breezy told this to USA Today; “We’re taking it one day at a time. She’s a wonderful girl. She’s beautiful. She’s on tour and our schedules don’t allow us to be as close as we want to be. But everything is good. She will be on my album.”

So, there it is, another Breezy and Rih Rih collaboration, the last these two collaborated was on Rihanna’s Unapologetic album for her track “Nobody’s Business.”

As for production on ‘X,’ Chris enlisted the likes of producer Danja, and Diplo.

As for naming his album ‘X’ and the title track,” Chris had this to say; “The song and the album title ‘X’ has a couple different meanings. It can refer to an ex-girlfriend, in terms of you always look forward to moving forward from. It’s also about being a reject in a sense. In me being myself, being able to grow up, me not always hanging around the right crowd or doing the right thing all the time — it’s me saying, ‘I’m over it. I’m past the bullsh– now.'”