Another Episode in the Michael Jackson Saga 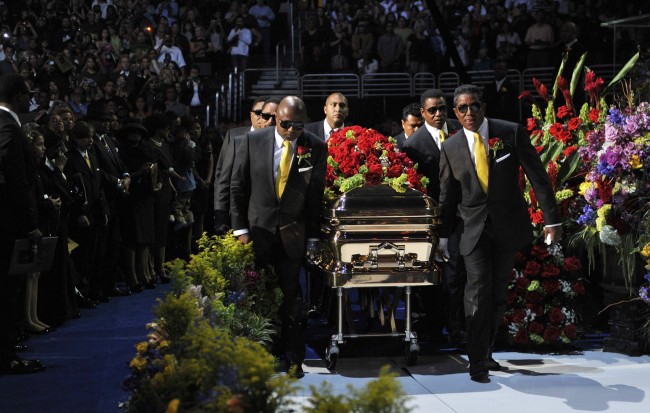 The Washington Post is previewing events at the initial hearing of debates over an upcoming trial by Michael Jackson’s mother Katherine against concert giant AEG Live.  She claims they are conspirators who hired Dr. Conrad Murray who was convicted of manslaughter for prescribing propofol to the singer which ultimately resulted in his death.

Murray has said he will refuse to testify if called.  Also not allowed in testimony is paternity evidence relating to his children which is to be dropped from a lawsuit and they also want no discussion of Michael’s molestation charges or any mention of Michael’s sibling,s financial problems.

Katherine, who acts as co-legal guardian says that there is no need to discuss her grandchildren’s parentage.

Prince Michael and his sister Paris are believed to be the children of their father’s ex-wife Debbie Rowe, while Blanket is said to have been born via a surrogate mother.

Superior Court Judge Yvette Palazuelos said she expects the trial to last about three months.  Jury selection will begin on April 2nd, and will most likely be lengthy due to Jackson’s fame and reputation.

AEG is prohibited from mentioning Jackson’s child molestation charges because he was acquitted.

But Palazuelos said she would allow testimony that Jackson became despondent and reliant on drugs because of the charges.

The judge also denied several personal issues un-related to the charges brought forth by the Jackson family.  The core of the case will be if AEG sufficiently screened Doctor Murray before hiring him to attend to Jackson, and what concerns they related to him before the concerts on the “This is It” tour.

There were exchanges between Katherine Jackson’s attorneys and those of AEG as to why neither one of them had sued Dr. Murray.  Jackson’s side said AEG didn’t sue Murray “because he had no money”.  The judge called it a sideshow.