It Was a Black Day for a Blue State 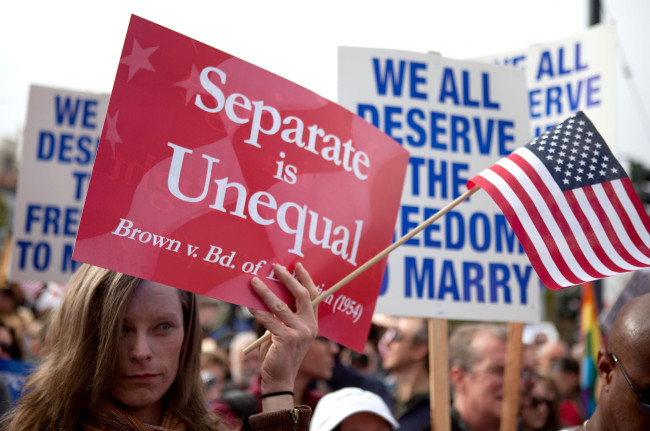 There is no way to communicate the importance of today’s gay marriage arguments designed to overturn Prop 8, will be heard by the U.S. Supreme Court, the final arbitrator in the legal dispute.

To grasp this moment’s constitutional meaning, it might be useful to review this monumental case’s history.

In November, 2008, voters in California passed proposition 8.  The amendment to the state Constitution declared “only marriage between a man and a woman is valid or recognized in California.”

How did a measure that is widely supported by the right wing pass in a state that overwhelmingly supported President Obama’s election on the same day?  The simple reason was demographics.

Although the “no on 8” campaign outspent the “yes on 8” group, those against the proposition were virtually a group of community activists who didn’t trust non-gay professionals, and refused to take advice from veteran campaigners.

Today attitudes in the “Golden State” have changed.  In May 2012 a survey showed 54% of the state’s voters favored same-sex marriage.  Even staunch Republican opponents believe prop 8 would not pass today.

Today the Supreme Court of the United States will hear arguments to overturn proposition 8.  The Constitutionality of the state’s amendment will be challenged.

Two former Reagan administration lawyers, Charles J. Cooper and Theodore B. Olson, will argue on opposite sides, with Olson contending an equal right to marry is basic to American liberty and Cooper saying the decision on changing state marriage laws should be left to the voters in each state.

An attorney representing the White House will also file an appeal to strike down the proposition.

The Court has four options in their decision.

First, they could uphold the proposition stating that California’s law does not violate the Constitution.  This would guarantee that same-sex marriage would be a state by state decision.

Second, the appeal could be dismissed.  A federal court in San Francisco has already struck down proposition 8, and no appeal was filed by the state’s attorneys.  The Court could send the case back to the federal court in California which would result in the legalizing of same-sex marriage.

Third, they could declare prop 8 unconstitutional, but in a definitive manner.  The U.S. 9thCircuit Court of Appeals, for example, said that the voter initiative wrongly took away a right that gays and lesbians had won in the state court. If the justices were to adopt this approach, the decision would affect only California.

Finally, the court could rule broadly that denying marriage to committed gay couples is unconstitutional, a decision that could legalize gay marriage nationwide.

Most recent polls reveal that 60% of Americans are now in favor of same-sex marriage, 70% under the age of 30.  The Netherlands became the first country to legalize gay marriage in 2001.  Ten other nations have joined them.  In 2004 Massachusetts was the first state to legalize same-sex marriage.  Since then 8 others have passed similar laws.

Tomorrow the Court will hear arguments to strike down the Defense of Marriage Act.