Hillary Clinton vs. Chris Christie in 2016? 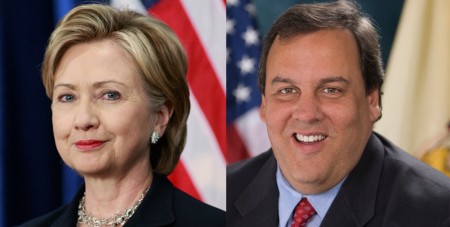 Hillary Clinton vs. Chris Christie in 2016?

Quinnipiac University released the results of a survey Thursday.  Voters were asked about 9 possible pairings in the 2016 Presidential election.

Peter A. Brown, assistant director of the Quinnipiac University Polling Institute, believes the former First Lady, Senator, and Secretary of State would have a huge advantage early in the campaign.  She has been in the public eye for twenty years and has been named the “most popular political figure in America”.

She was leading in the polls in 2006 when her fight for the nomination was derailed by a young African-American Senator from Illinois.

Biden would trail Christie 43%-40% and would top Ryan 45%-42%. The three point margins in both matchups are within the survey’s sampling error. According to the poll, the vice president would lead Rubio 45%-38%.

This survey is obviously taken too early with the election 3 ½ years away, but it is intriguing.

The Quinnipiac University poll was conducted February 27-March 4, with 1,944 registered voters nationwide questioned by telephone. The survey’s overall sampling error is plus or minus 2.2 percentage points.