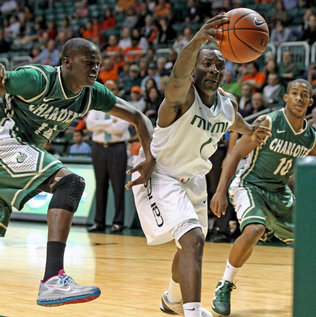 Put the T-Shirts Back in the Box, Miami

The Miami Hurricanes were at home against Georgia Tech last night.  A win would give them the ACC Championship.  The championship T-Shirts were in a box to be handed out after the game, and the scissors were sharpened to cut down the nets.  The shirts are still in the box, and the scissors are back in the trainers bag.

The Hurricanes, ranked number 6, might have been a little bit over confident.  They squandered a 13 point lead in the second half to lose 71-69 when Marcus Georges-Hunt tipped in his own missed shot at the buzzer.

The defeat was the Hurricanes’ third in four games after a 14-game winning streak, and they fell to 13-1 at home.  They are guaranteed a share of the conference title, but can still win it outright with a victory Saturday afternoon when Clemson comes to town.

“It’s tough,” Miami’s Julian Gamble said. “You expect to win. But when you let a team get confidence and they start making shots, it’s tougher and tougher to guard them down the stretch. You have to give them credit, because they hit some really tough shots.”

It was the first victory for the Yellow Jackets against a top 20 team since March 2010.  But last night it was the Georgia Tech fans who swarmed the court in Miami after the final buzzer.