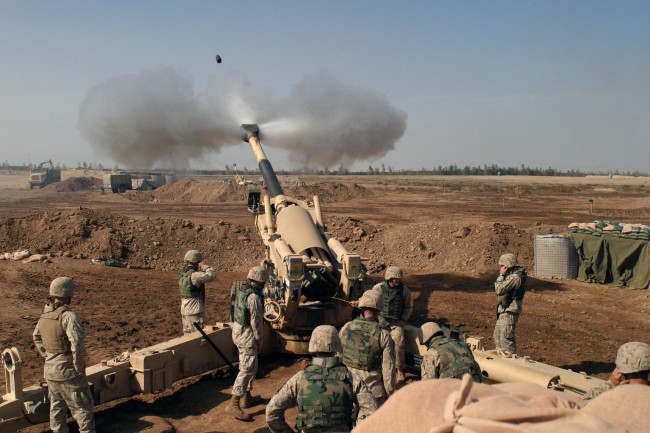 Brendon O’Connor is an associate professor in American politics at the US Studies Centre at the University of Sydney.  Continued below is a summation of his article in “the Australian”.  On the 10 year anniversary of the Iraq invasion, let’s take a look at the outcome.

21 days after the invasion of Iraq, George W. Bush stood on the deck of the “USS Abraham Lincoln” and declared victory.  As it often does, a prideful act signifies a future defeat.

Waging a war that depleted the United States’ resources and drained the US of credibility, resources and energy when its main global competitor, China, was relentlessly on the rise, will have repercussions for years to come.

The United States lost credibility worldwide when it invaded Iraq based on questionable claims that Saddam Hussein possessed weapons of mass destruction, and was planning to use them against the U.S.  As the invasion persisted, and no weapons were found, additional international condemnation was directed against America.

Further damage was done when photographs showing the abuse of Iraqi prisoners at Abu Ghraib went viral globally. Then, across the longer term, there was the fact large numbers of Iraqi civilians and a steady flow of American soldiers continued to be killed in Iraq in the years after the U.S. seized power.

The U.S. made an effort to rebuild the ravaged country by pouring billions of dollars into a rebuilding effort.  But the majority of the money ended up in the coffers of profiteering contractors such as Haliburton, and Iraqi warlords.

When Bush poured additional troops and money in 2007 in what was labeled “the surge”, it did slow the increased violence, but was far from the major success claimed by Senator John McCain recently.

Ten years of hindsight expose a decline in the overall stability of the United States.  In the first few years of the 21st century, the Bush administration vocalized their hopes of U.S. dominance spreading throughout the world.  As time has passed U.S. primacy is no longer a topic of discussion.  As China’s economy is on the rise, the United States is declining, that is undeniable fact.  Iraq is not the sole cause of this pattern of decline; however, it was a bad decision that made other existing problems a lot worse, such as the US’s taxation levels being set too low for the level of spending that both the Bush and Obama administrations have engaged in.

The decline will be slow.  And it is likely to remain the most influential nation in our world for a long time to come. Its military power and vast network of alliances are not likely to be overtaken in the near future.  However, its economy, which was its underlying power, will continue to decline over the next 30 years.  The underlying trend since 1945 has been a relative decline in US economic dominance.  (The US share of world gross domestic product was, remarkably, around 50 per cent in 1945.)

The inability of the government of the United States to govern effectively contributes to the negative effects of the debacle in Iraq.

The impact of the Iraq War on the US’s sense of purpose could be mitigated by sensible bipartisan agreements between the Democrats and Republicans to address the US’s fiscal troubles, fix its creaking infrastructure and invest in the technologies of the future. This seems unlikely; instead, ongoing political dysfunction will compound the negative legacy of a bad choice made 10 years ago.

Americans are unable, or choose not to see the viewpoint of those outside our own government.  Those who read the facts know well that our politicians lie to us, they believe that is their job.

Note the credentials of Mr. Brendon O’Connor.  Carefully read his facts, and realize that world opinion is important.  No country can exist on its own island.  Witness the increasing, and deserved isolation of North Korea.

Our government cannot rule us, they belong to us.  Washington has become too powerful, ignoring the wishes and concerns of the people they represent.  Their opinions are important, but they must not become the sole factor for their actions.

The United States is on a path to follow the policies of England in the 1700’s, which were the ultimate catalyst in the creation of a new Country.

Our right to vote was intended to give the people a voice as to what is done in our Nation’s Capitol.  It doesn’t appear to be working.  I vote, but every election year I hear the refrain, “why should I vote, it doesn’t count anyway”.

The sad fact is, they may be right.  Between politicians making promises they have no intention of keeping, and the Electoral College which nullifies votes of many who make the effort to do “their patriotic duty”, voting often has no relevance as to what our government does for the people of our country.

I desperately wish I had a workable solution to this ever-growing problem.  We need leaders who will stand up for the general public, not politicians whose only concern is their “career”, a condition that was never intended to exist.