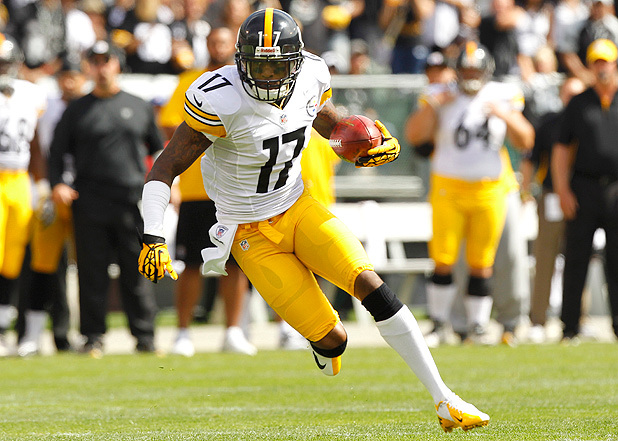 In one the early and most lucrative signings in the free agency period of the NFL, the Miami Dolphins have signed the speedy Mike Wallace, formerly of the Pittsburgh Steelers.

A 5 year, 65 million dollar deal has been offered to Wallace who has verbally agreed to the terms.

Wallace was elected to the Pro Bowl in 2011 with a career-high 72 receptions. In 2010, Wallace piled up 1,257 yards. He had a down year in 2012, though, holding out of training camp and finishing with 836 receiving yards on the season, but still led all Steelers receivers with 8 touchdowns.  He also dropped several passes which cost the Steelers 1st downs or touchdowns.

This is the second signing of the day for the fish. The Dolphins also signed Baltimore Ravens linebacker Dannel Ellerbe, apparently to a five-year, $35 million deal.  Ellerbe was the only consistent linebacker for the Ravens last season, and may be a better deal than Wallace, who has “questionable hands”.

Another big deal signed today will help the Browns and desperately harm the Ravens who lost their only effective pass rusher in Paul Kruger.  In a reported $40 million deal, linebacker Kruger signed with the Cleveland Browns.

The biggest loser today was the Baltimore Ravens.  They lost their two best defensive players.  A defense that was in the bottom third of the NFL last season will have to scramble to find effective replacements.

As for Wallace and the Pittsburgh Steelers, they will miss him, but not as much as they might have two years ago.  They have a surplus of fast, young wide receivers in Antonio Brown, Emmanuel Sanders, Jerricho Cotchery, and rookies David Gilreath and Derek Moye.  And Plaxico Burress returned to the team where he was successful as a rookie.

There are enumerable pros and cons during the free agency season.  The salary cap has forced teams on both sides of the issue to carefully pick and choose who to keep and who to let go.  And the teams that sign free agents are taking the ultimate risk.

If a player asking for 40 to 60 million dollars for a 5 year contract is not re-signed, why not?  What do they know that the team willing to sign that player does not know?

They have several things in common.  They have great coaches.  They keep a core of players who can adapt to changes without disrupting their play.  They are unselfish, willing to re-negotiate contracts which will hopefully result in an NFL Championship.

We’ll see more changes, that’s a guarantee.  And we’ll see if they make a positive change for the teams willing to spend “the big bucks”.  The basic premise of professional sports is that “you can’t buy a championship”.

One Response to "Mike Wallace Signed by Miami Steelers"