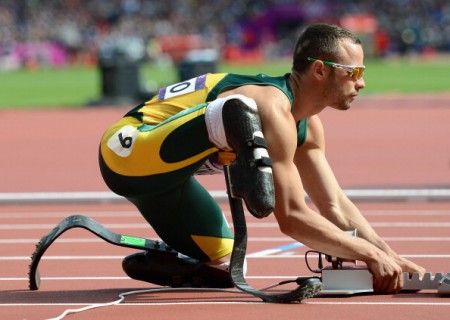 Oscar Pistorius lawyers have filed an appeal in a South African court against bail restrictions imposed on the Olympian. According to AP “The conditions appealed against are unwarranted and not substantiated by the facts,” said the appeal.

Oscar was charged with murdering his girlfriend Reeva Steenkamp, leaves the Pretoria magistrate’s court with his family, including his sister Aimee. Pictured. Photograph: Tj Lemon/EPA.

Oscar Pistorius was out on bail at the end of a highly emotionally charged hearing, which has gripped South Africa and the world.

Pistorius’s family prayed in a circle, while the judge spoke, there were smiles of relief, and a shout of “yes!” as they leaped to their feet in the highly charged courtroom.
Magistrate Desmond Nair set the bail at 1m rand (£73,000) and said Pistorius must hand over his passport and turn in any weapons he owns. The Paralympian’s next court appearance was scheduled for 4 June.
The magistrate also ruled he could not return to his home, where the killing of Steenkamp took place.

Oscar Pistorius’s bail conditions
Upon payment of the 100,000 rand (£73,000) Pistorius must be released with the following conditions:
• He appears in court on 4 June at 8.30am.
• He surrenders all passports and refrains from applying for any passports.
• He refrains from entering any airport.
• He surrenders all firearms.
• He refrains from possessing any firearms.
• He refrains from talking to any witnesses for the prosecution.
• He will have a probation officer and correctional official from the date of release until the case is concluded.
• He shall inform the official of all his movements and ask for permission for any journeys outside Pretoria.
• He shall give them a phone number and must be contactable day and night.
• He must not be charged with an offence of violence against women.
• He must not use drugs or alcohol.
• He must not return to his home and must not make contact with any residents of his estate except the Stander family.
“He’s not under house arrest, but his movements need to be known to us so that we don’t pitch there and he’s not there,” Smalberger had said. “We agree on ‘free time’ normally during the course of the day, and in the evening we expect him to be home.”

Nair said Pistorius’s affidavit, in which he gave his version of the events of the shooting on morning of 14 February in a sworn statement, had helped his application for bail in Pretoria magistrate’s court. “That reaching out in the affidavit, the way that he did, placing it before the court,” Nair said. “I come to the conclusion that the accused has made a case to be released on bail.”

“A blanket restriction on speaking to residents is unfair” and infringes on Pistorius’ rights to consult people on the estate to prepare for his trial, the appeal said.

Pistorius Trial: Will It Be Over Before It Begins?
The autopsy of Reeva Steenkamp, girlfriend of “the Blade Runner”, Oscar Pistorius has been completed and handed to authorities. Its contents have
not been revealed to the public, but one fact was revealed, the 29 year old model/law school graduate was not pregnant as reported by some questionable sources.
What will be of interest is if the “bloodied cricket bat” reportedly discovered at the scene was used on Ms. Steenkamp. One unnamed police officer told South African reporters that her “head had been crushed.”
The job of the defense in the next several months will be to cast doubt on the prosecution’s case and make Pistorius story of an intruder plausible.
The only ‘sure thing’ in a high profile case is that most people will have made up their mind before it begins.