After having to postpone her Balitmore show this week because of laryngitis. Rihanna has not let her being sick stop her from supporting charity. Rihanna took some time to show support for RED NOSE DAY by posting on her Instagram a photo of herself in nothing but a white t-shirt with Marilyn Monroe on the front wearing big glasses and a red nose. 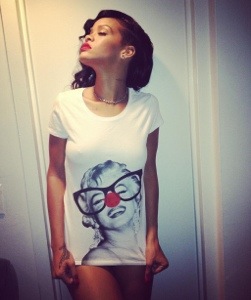 The RED NOSE DAY campaign is a charity that began 25 years ago and occurs annually on March 15. RED NOSE DAY to date has raised £600 million and helped 50 million people.

The RED NOSE DAY campaign is also a charity that calls on people to do something funny for charity.

Stella McCartney who runs the charity showed gratitude towards Rihanna’s photo. As she tweeted this tweet:

In the UK donors help in giving shelter to young people living on the streets and helps protect those who are domestic abuse victims. For those in Africa, donations help in saving thousands from malaria and provides whole communities with fresh water and life saving vaccines.