This is 40 promoted as sequel to “Knocked Up” 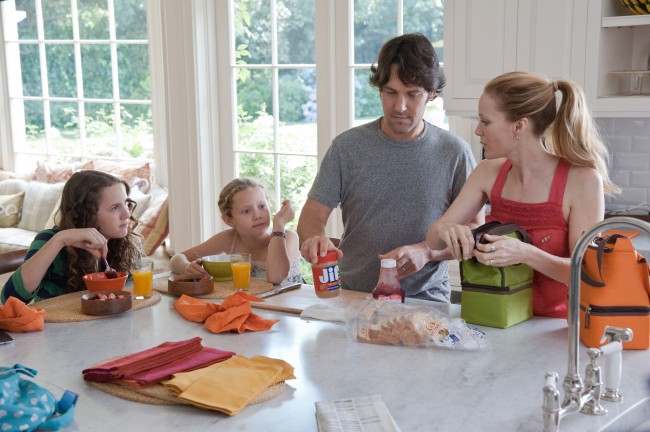 This is 40
2½ stars
Rated R for sexual content, crude humor, pervasive language and some drug material
Universal
Available March 22 on DVD, Blu-ray and on demand

Writer-director Judd Apatow’s “This is 40” is being promoted as “The sort-of sequel to ‘Knocked Up,’ ” but the two films have little in common aside from Apatow himself. Both movies feature the filmmaker’s acerbic wit and willingness to go in depth on even the crudest topics, but the moods of the movies are worlds apart.

“Knocked Up” was a frequently hilarious but ultimately sweet look at youthful relationships. “This is 40” is an occasionally funny but often-depressing commentary on the middle-age years. The trouble lies in the couple at the center of the story. Pete (Paul Rudd) is a music producer running a floundering indie record label, and he’s married to Debbie (Leslie Mann), the high-strung owner of a high-end clothing shop. They have two young daughters, and they both celebrate their 40th birthdays during the course of the film.

Judging from the title of the movie, audiences are supposed to believe that the troubles that Pete and Debbie encounter are related to their age. In reality, they stem from bad financial and social choices spurned by their increasingly dysfunctional home life. Case in point: Pete’s record company is on the verge of failure, yet he continues to give money to his freeloading father (Albert Brooks). In the meantime, Debbie complains about the financial handouts and just about everything else Pete does. Because of this, he fails to divulge just how bad their financial situation is. Through it all, they drive high-end cars, throw lavish parties and do just about anything that’s sure to make their situation worse. Yet, viewers are somehow supposed to invest in their story.

As he did with “Knocked Up,” Apatow tries to bring “This is 40” to a sentimental and satisfying close, but he is much less successful this time. Primarily, that’s because viewers are asked to believe that Pete and Debbie actually have a deep love for one another, something that isn’t established in the movie’s first two-thirds. Because it’s as hard to believe in their relationship as it is to root for them, “This is 40” feels longer than it should.

Thankfully, the character drama is broken up by a large number of Apatow gags, many of which are funny. These bits prevent the work from becoming a total drag, but they don’t stop it from dragging.

DVD and Blu-ray extras include a gag reel, deleted scenes, tunes from musicians featured in the film and an audio commentary by Apatow.