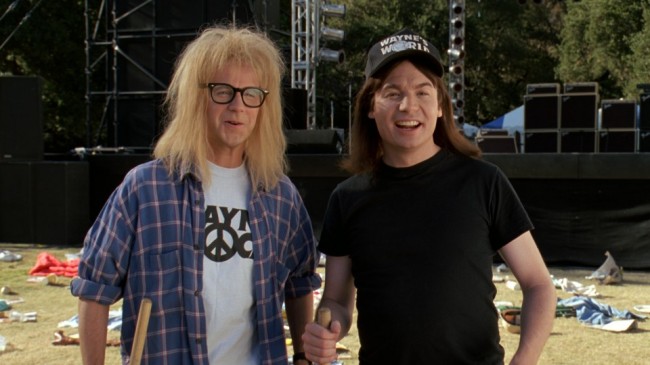 The Academy to host a “Wayne’s World” Reunion

Producer Lorne Michaels, writer-actor Mike Myers, actor Dana Carvey and director Penelope Spheeris will reunite for a panel discussion and screening of “Wayne’s World” on Tuesday, April 23, at 7:30 p.m. at the Academy of Motion Picture Arts and Sciences’ Samuel Goldwyn Theater in Beverly Hills. The evening will be introduced by Academy President Hawk Koch, who also served as the film’s executive producer.

Myers made his film debut alongside Carvey in this 1992 big-screen version of their “Saturday Night Live” sketch about two metal-head teenagers, Wayne Campbell and Garth Algar, who host a public access cable TV show called “Wayne’s World” from a basement in Aurora, Illinois.

The film was a smash hit, grossing more than $180 million worldwide. The influence of “Wayne’s World” on popular culture includes several phrases that became everyday expressions, such as “Schwing!” “NOT!” and “We’re not worthy!” The soundtrack also propelled Queen’s “Bohemian Rhapsody” to #2 on the Billboard Hot 100 chart, more than 15 years after its original release.

The new print to be screened is courtesy of the Academy Film Archive and Paramount.

Tickets for “Wayne’s World” are $5 for the general public and $3 for Academy members and students with a valid ID, and may be purchased starting April 1 online at www.oscars.org, in person at the Academy box office or by mail. Doors open at 6:30 p.m. The Samuel Goldwyn Theater is located at 8949 Wilshire Boulevard in Beverly Hills. All seating is unreserved. For more information, call (310) 247-3600 or visit www.oscars.org.