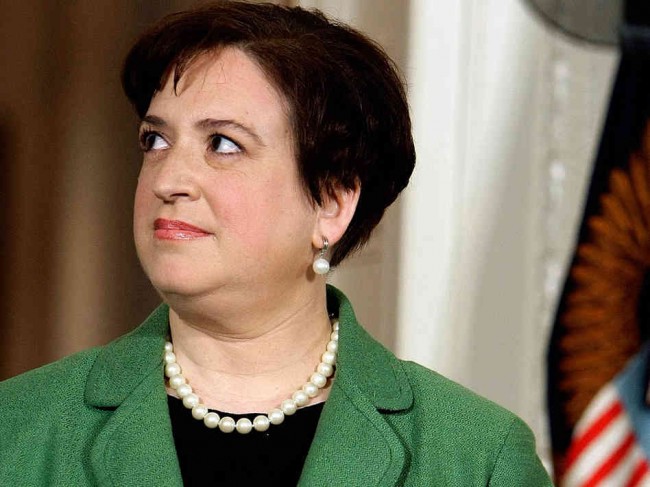 For about 68 minutes the debate over the repeal of the DOMA continued.  Then the junior member of the court had her opportunity to invoke the truth and common sense.

Paul Clement, the attorney representing the House GOP, suggested that when DOMA was passed “in 1996, something was happening” — states were considering whether to upset the “traditional” view of marriage and include gay and lesbian couples.

There was an audible pause until Justice Kagan spoke.

“I’m going to quote from the House Report here,” said Kagan firmly, referring to the official recommendation from various congressional committees on the law’s intent. “That ‘Congress decided to reflect an honor of collective moral judgment and to express moral disapproval of homosexuality.’ Is that what happened in 1996?”

As the gallery gasped, she continued.

“When Congress targets a group that is not everybody’s favorite group in the world, that we look at those cases — even if they’re not suspect — with some rigor to say: Do we really think that Congress was doing this for uniformity reasons, or do we think that Congress’ judgment was infected by dislike, by fear, by animus?” she asked. “And whether that sends up a pretty good red flag that that’s what was going on.”

Although the more liberal of the Justices were somewhat timid yesterday during the consideration of California’s proposition 8, they displayed a new attitude today.

Chief Justice John Roberts and ultra-conservative Antonin Scalia were subdued after the challenge of congressional influence.

Roberta Kaplan, attorney for key plaintiff Edith Windsor, made somewhat of a speech noting the change in attitude towards same-sex marriage which is usually a cue for Scalia to demean the attorneys.  He stayed silent.

Although Kagan had not previously been a judge, she seems at ease with her role, and confident in appearance before the public and her peers.

The conservative justices were not exactly sitting on their hands, but aside from Justice Clarence Thomas, who never speaks at argument, their energy was noticeably absent.

The nine Justices will meet in private this week with no one else present to vote amongst themselves on the two cases.  The actual written opinions are not expected until sometime in June

7 Responses to "Justice Elena Kagan Takes the Spotlight on DOMA"