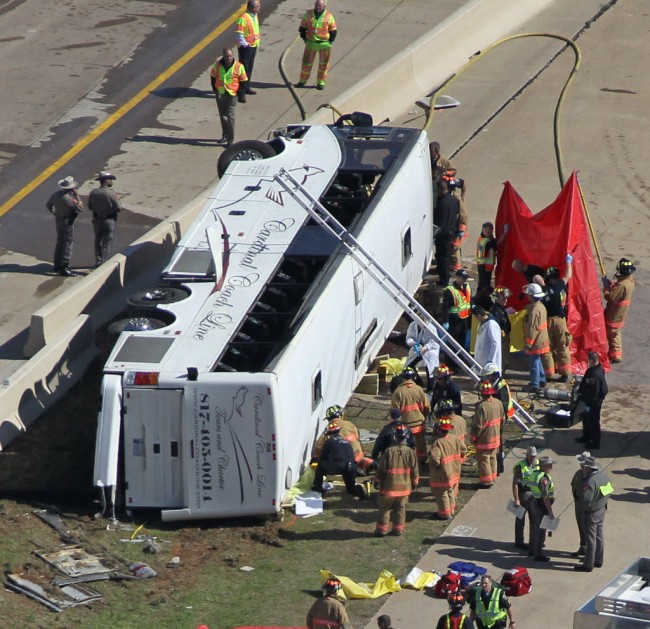 Witnesses say the bus, bound for and Oklahoma gambling area swerved in the northbound lanes, hit a guardrail, and flipped over.  Besides the two deaths, three dozen others were reported injured, 16 of which are in critical condition.  Many of the most seriously injured were trapped under the bus.

They were headed for the Choctaw Casino Resort, in Durant, Oklahoma.  One passenger, Dan Risik, told NBC5, that he heard a crash “and the bus started to veer back and forth and ended up flipping over on its side. People were screaming on top of each other.”

Passengers said they had picked up additional passengers in Fort Worth, and few of the mostly elderly men and women were wearing seat belts.

Emergency vehicles could be seen swarming the bus, with ladders being used to pull passengers from some broken windows. Witnesses said one person appeared to be pinned by the bus.

Edward Cluck, another passerby who stopped to help, said smoke was pouring from the bus and fuel poured onto the highway, WFAA-TV reported.

“The front of the bus was completely tore off,” he said. “The people were all packed on top of each other, falling out of their seats … Man, pray for them. They need some help.”