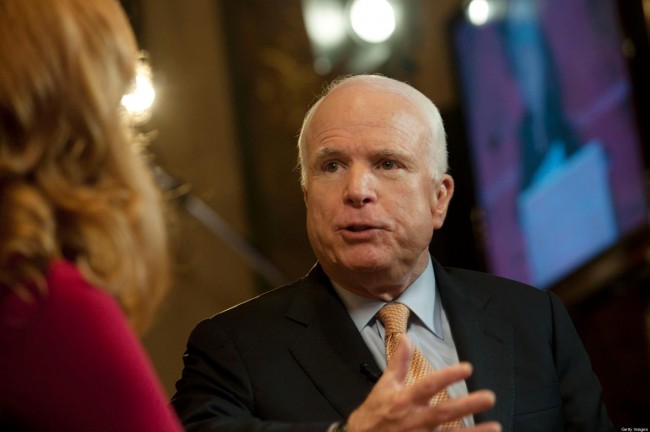 Appearing on “Meet the Press” Sunday Morning, Senator John McCain, (R-Ariz.), urged his fellow Republicans not to filibuster the subject of gun control.

McCain voiced the complaints of millions of Americans who want to see our nation’s problems debated, the very purpose for which we have a congress and senate.  We are tired of our elected officials deciding on an issue before it receives full deliberation by both parties.  That is the American way.

“I don’t understand it,” said McCain on CBS’s “Face the Nation.” “The purpose of the United States Senate is to debate and to vote and to let the people know where we stand.”

“What are we afraid of? Why would we not want… if this issue is as important as all of us think it is, why not take  it to one of the world’s greatest deliberative bodies – that’s one of the greatest exaggerations in history by the way – but you know why not take it up, an amendment and debate. The American people will profit from it,” said the Arizona senator.

“I don’t understand why United States senators want to block debate when the leaders said we could have amendments,” McCain added.

A serious error by voters put certain legislators into office who want to change the way our government works.  And now it doesn’t.

Senators Rand Paul (Ky.), Mike Lee (Utah), Marco Rubio, and Ted Cruz (Texas), have informed Majority leader Harry Reid that they will filibuster any discussion about gun control.  These “TEA Party Darlings” have no place in the debate over our nation’s most serious problems.  They do not have valid arguments, and do not have one constructive idea among them.

The Republican Party is in a state of flux.  But the changes in its structure are not only destructive to the once Grand Old Party, they are destructive to our nation.

Appearing with McCain on the set of “Meet the Press” was Senator Charles Schumer, (D-NY).  “If we go to the floor, I’m still hopeful that what I call the ‘sweet spot’ background checks can succeed. We are working hard there. Sen. [Joe] Manchin (D-W.Va.) and Sen. [Mark] Kirk [R-Ill.] have a few ideas that could modify the proposal.”

McCain said he would welcome a debate on background checks on the Senate floor.

“Everybody wants the same goal to keep the guns out of the hands of criminals and the mentally disabled. Background checks are being conducted. Are they sufficient, are there ways to improve those? Then I think that’s something that the American people and certainly Congress could be helped by if we have a vigorous debate and discussion,” said McCain.

I commend Senator McCain for his attempt to educate some of his ill-informed colleagues.  But nothing was, or ever is, mentioned about what the American people want.  Even long-standing members of the NRA support background checks.  The citizens of our country have the right to feel safe, and we expect our government to do the right thing and support our position on the issues, not their own personal beliefs.

The teeth of gun control bills will most likely be left to each state.  That is the way it should be.  But a federal law requiring background checks will serve everyone.  A nation which allows virtually anyone to own weapons, and possesses more guns per capita than any other nation in the world, should have at least minimal control over the purchase of them.

In 2010, guns took the lives of 31,076 Americans in homicides, suicides and unintentional shootings.  That figure is over 7 and ½ times the number of our military lost in Iraq.  But no one laments them, with the exception of their families and friends.

We need honest discussion about this disease.  We don’t need poorly scholared politicians or a lobby to inject emotions and mislead us on such a serious problem.

Not only are these few senators, who say they will filibuster the issue, mistaken, they are also campaigning.  Paul’s earlier stunt on the floor of the Senate was just that, a publicity stunt.  He doesn’t care one way or another about the issues before him.  He cares about the 2016 election.