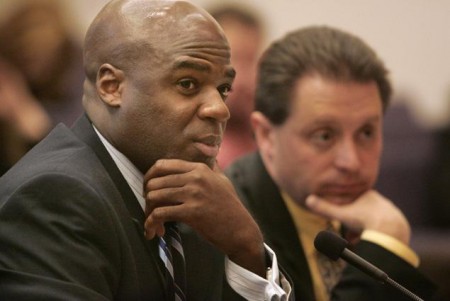 During a debate on same-sex marriage, Nevada state senator Kelvin Atkinson announced that he was a gay black male. Mr. Atkinson’s exact words were, “I’m black. I’m gay. I know this is the first time many of you have heard me say that I am a black, gay male. If this hurts your marriage, then your marriage was in trouble in the first place.”

The debate that state senator Kelvin Atkinson was debating was to lift the state ban on same-sex marriage in the state of Nevada. Mr. Atkinson was hoping to get other senators in favor of same-sex marriage by coming out and announcing his own sexuality. Something that does not come easy these days as many are faced with being bullied and hate by doing so.

Still, state senator Kelvin Atkinson stood up and announced that he is gay.

His decision to come out of the closet could help in lifting the ban or could hurt it or not have any effect at all.

The measure in question did pass the senate with 11 Democrats and 1 Republican voting in favor 12-9. If passed this same-sex marriage measure would remove the ban on gay marriages in the Nevada Constitution.

Now, the measure moves to the assembly which has a 27-15 Democratic advantage and if it passes the assembly, will be passed on to the voters in the state of Nevada in the 2015 elections.