American Idol All Alumni Judges Who Would You Pick (Poll) 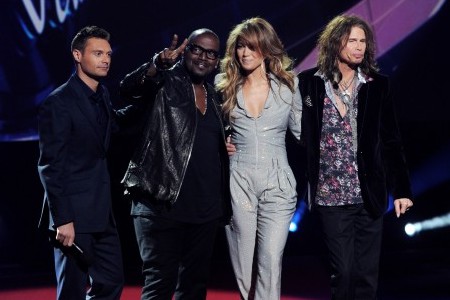 With all this talk about Jennifer Hudson being named the first new judge on season 13 of American Idol, we started trying to figure out who else should be given the chance at a seat. So in honour of the new American Idol all alumni panel of judges we decided to find out who you would pick.

The news has been full of who “they” think would be great judges who, like Jennifer, have been through that “trail by fire” of competing and either winning or coming close, who have gone on to carve out careers for themselves.

Kelly Clarkson is the clear favorite. Popular on the show as the first winner ever and she’s got a solid fan base who clearly adore the singer. We figure that she might just be a shoe-in as another of the diminished judges seats, even though she has not been too overjoyed at the prospect of returning.

But we also started thinking about who else might be as popular with other folks.

In at number two on the choice list we have Clay Aiken who won second place on season three of Idol. On May 21, 2003, Aiken came in a close second to Ruben Studdard, who won the contest by 134,000 votes out of more than 24,000,000 votes cast. The result was very controversial, with the answer being that Idol’s voting system was just not capable of handling the number of attempted calls.

With Clay as a clear fan favourite, it would make a lot of sense if the network chose him to be another of the new judges. So if American Idol is going to feature all alumni judges who would you pick as your personal favourite. Would you vote for “Team Clarkson,” or “Team Clay,” would you go for another name that has been mentioned like, for instance, “Team Lambert?”

Because another name that has been bandied about is that of Adam Lambert. Like Clay Aiken, he finished as the runner-up in the eighth season of the show. His time on American Idol was full of controversy after photos of Adam surfaced where he was kissing another man during the American Idol competition. News nuisance and staunch right-winger Bill O-Reilly took umbrage to the photos and called them “embarrassing” but, amazingly he did not agree that the images would impact the competition.

Adam Lambert confirmed that the photos were of him and he stated that he had nothing to hide and had always been open about his life. Mainstream media had a field day while they speculated on his sexuality and the readiness of American Idol voters for an openly gay winner.

When asked by Rolling Stone whether the buzz surrounding his sexual orientation impacted the final vote, Lambert laughed and said “probably.” He confirmed that he was gay in a Rolling Stone cover interview after he was named runner-up.

We feel like there may be few more candidates that have been ignored for the American Idol all alumni judges seat’s besides Clarkson, Lambert, and Aiken. So we are asking you, dear public to take our poll and tell us who you’d like to see in a judges seat along with Jennifer Hudson. There is nothing to win, but you can tell us who you would like to see on the panel.