“Arrested Development” set to return May 26 on Netflix 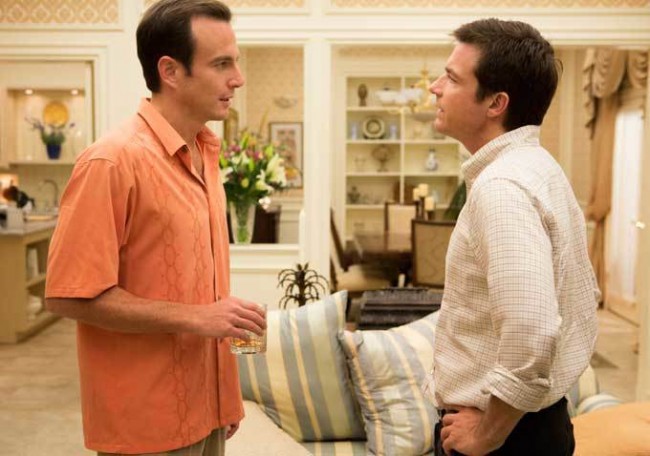 Fans go bananas for “Arrested Development” and fans in selected areas of the country, like Manhattan, even got a chance to try the chocolate-covered frozen bananas featured on the show direct from a replica of the Bluth Original Frozen Banana Stand this past Monday afternoon.

Being able to purchase and eat these frozen delicacies is just one of the ways “Arrested Development” is  promoting the return of the series, which aired from 2003-2006, when it was cancelled.  A rep for the show said that about 2,000 chocolate-covered frozen bananas were given away from the replica yellow, banana-shaped hut set up to promote the show.

Fans living in towns other than the fortunate few taking part in the giveaway on Monday plan to have watch parties all their own on May 26, when new episodes that have been taped are set to be released by Netflix. They will celebrate with their own versions of the chocolate-covered banana treats.

The rep said that in London, “people were waiting in line for six hours to get bananas.” The stand will appear through Thursday in other locations around New York City before heading to Los Angeles.

The show, produced by Ron Howard, has been hailed by critics and fans alike for its witty plots, delightfully twisted sense of humor, and one of the best comedic ensemble casts of all time.

Michael Bluth (played by Jason Bateman) tries to hold his quirky family together, though they seem determined to thwart his attempts by their often bizarre antics.  Michael Cera plays his son, George Michael, and other stars of the series include Will Arnett as Michael’s magic-loving brother Gob (pronounced Job),  Portia Ross as their sister, Lindsay, and David Cross, as her husband Tobias Funke.  As  example of the funny comic  bit in the series, Tobias tries out for the Blue Man Group and dyes his skin blue, and Gob makes a yacht disappear by blowing it up.

Though you might not live in a city that is on the tour of the replica of the Bluth Original Frozen Banana Stand, you can check out the other menu items at Seamless.com. The offerings include Lucille Bluth’s (she’s the family matron) favorite breakfast of vodka on the rocks and a piece of toast. Then, there’s Lindsay Bluth’s  delectable selection, which is watery with “a smack of ham to it.”  If you’re a person who happens to like pharmaceuticals, the menu also includes some of these, pushed by Dr. Funke’s 100% Natural Good Time Family Band Solution, the band that he once had with Lindsay and their daughter, Maebe.

As you watch the new episodes of “Arrested Development” remember, while you’re eating your frozen chocolate-covered bananas, the famous words of the family’s patron, George Bluth, Sr. (played by Jeffrey Tambor) : “There’s money in the banana stand.”

All four past seasons of the show are currently available on Netflix.  You can see a video trailer here.