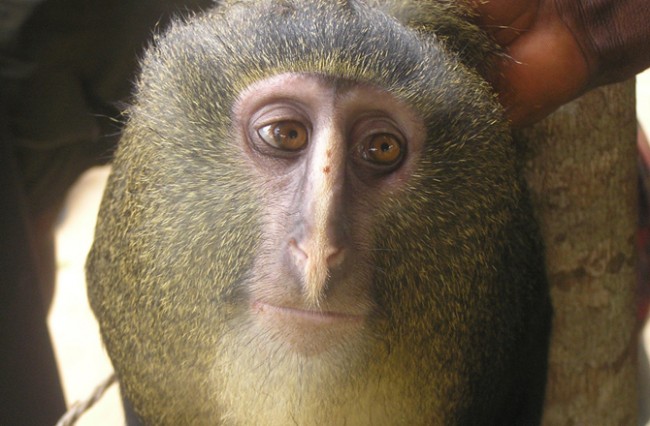 The monkey with blue genitals joins the list that was announced by the international Institute for Species Exploration at Arizona State University. The publication of the list comes just in time to mark the birthday of the founder of the modern system of species classification, Carolus Linnaeus.

Natives of the DRC had known of the monkey and often hunted it for its meat, but scientists just confirmed and described its existence in 2012.

About 18,000 new species in all were discovered in 2012, according to the institute. It is dedicated to finding 10 million new species of life on Earth during the next fifty years. There are an estimated 12 million living species, with millions more species existing in the microbial world.  Scientists estimate that they’ve only identified about 2 million of them thus far, and that we may know about only 86 percent of the overall total.

A 140 of the species were nominated to be included on the Top Ten list. A committee of scientists narrowed these down to ten. Their decision was based on a combination of factors, such as their oddness, appearance and importance to humans, according to Antonio Valdecasas, one of the scientists involved in the process.

“We look for organisms with unexpected features or size and those found in rare or difficult to reach habitats. We also look for organisms that are especially significant to humans — those that play a certain role in human habitat or that are considered a close relative,” Valdecasas said.

“Selecting the final list of new species from a wide representation of life forms such as bacteria, fungi, plants and animals, is difficult. It requires finding equilibrium between certain criteria and the special insights revealed by selection committee members.”

One of the other species that made the Top Ten list are the Lilliputian violet, which was discovered in Peru. It was found living in the Andes mountains, and it was named after the  miniature people of Lilliput Island in Gulliver’s Travels. The Lilliputian violet stands less than an inch tall.

Another species on the list is the carnivorous Lyre Sponge, which was found more than a mile benath the surface of the Pacific Ocean. It expands to catch its prey.

The “No to the Mine!” snake eats snails. It got its rather strange name because it lives in Panama’s Serrania de Tabasara mountain range. The mining of ore is one of the main industries in that area of Panama. This nocturnal snake is blakc-and-white striped, and also eats earthworms and amphibian eggs.

The only fungus that made the list is the Ochroconis anomala, that was discovered in France on the the walls of the Lascaux Cave.  The cave’s walls are famous for their depictions of some of the earliest examples of artwork created by man. The black fungus is unfortunately starting to grow over and obscure some of the drawings.

Yet another species that made the list is the Paedophryne amanuensis, New Guinea. This is the world’s smallest frog, and also the smallest known vertebrate in the world. Several can fit on a dime.

One of the final three species on the Top Ten list is the  Eugenia petrikensis, which was discovered in littoral forest of East Madagascar. It is a shrub that has clusters of magenta-colored flowers.

Another one is a glow-in-the-dark cockroach, called the Luchihormetica luckae, that is a native of Ecuador. It was found in near the Tungurahua volcano, and in such minute numbers that scientist fear it might have already gone extinct.

The Semachrysa jade butterfly, of Malaysia, is the the first species ever discovered on social media. An entomologist in California, Shaun Winterton, saw it while he was scrolling through photos on Flickr, and spotted a butterfly he’d never seen before.

The last one of the species that made the Top Ten list is a fly that hangs upside down. It’s called the Juracimbrophlebia ginkofolia, and was discovered in China’s Jiulongshan Formation. Scientists theorize that the fly might be trying to mimic the appearance of the seeds of a relative of the gingko tree.