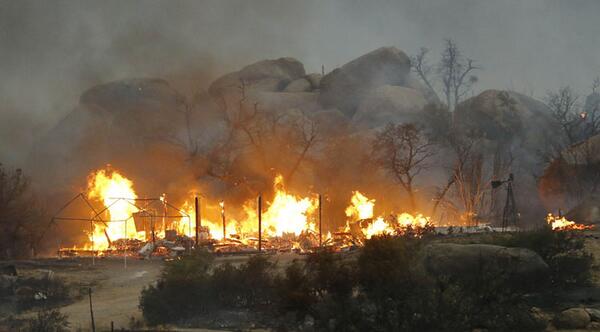 Nineteen firefighter’s died and 22 were injured battling the Yarnell Hill fire that raged through half the town on Sunday.  According to Arizona State forestry officials, it is the state’s worst ever wildfire firefighter tragedy.

The fast moving Yarnell Hill fire which is 85 miles northwest of Pheonix, has destroyed about 2,000 acres and is not contained, officials said.

“The fire just overtook them,” Art Morrison, an official with the state forestry service, told CNN, adding, “By the time the other firefighters got in, they didn’t survive.”

According to Morrison, usually 20 firefighters are assigned to a hot shot unit, the name for elite firefighting teams, he is uncertain why there were only 19 recovered.

“Hopefully they went out with one short,” an emotional Morrison said.  “I started as a firefighter in 1968, and I’ve never seen anything like this.”

Fire officials expect half of the 500 homes in the town to be consumed by the fire, which is still burning uncontained.

Reichling said federal firefighters are on the way and expect the number of firefighters on the scene to rise to 400.

Roxie Glover, a spokeswoman for Wickenburg Community Hospital was told to expect a number of injured firefighters, but later the alert was canceled.

“It became clear that the firefighters had been deceased,” Glover told The Times. “We were told that we were not getting firefighters.”

Eight of the 22 firefighters injured were taken to Wickenburg Community Hospital, some were airlifted to a burn unit in Pheonix, and others were transported to Yavapai Regional Medical Center, Glover said.

The 19 firefighters who perished were part of the Granite Mountain Hot Shot Crew.