Black Sabbath Back with Ozzy on New Album 13 (Live Video) 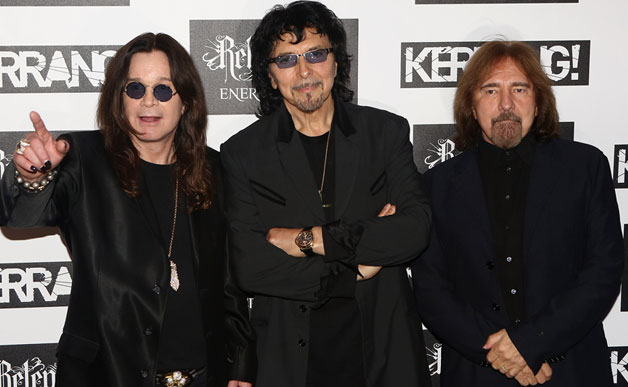 Black Sabbath is back with Ozzy Osbourne on their new album 13. 13, which was produced by Rick Rubin,  is available for an advance listen free right now. You can stream it from the iTunes store  here. The album will be relased in stores this Tuesday, June 11.

13 (Universal Republic) is the first album that Black Sabbath has released since 1978 which features original singer Ozzy Osbourne. Also, the original lead guitarist, Tony Iommi, and original bass player, Geezer Butler, are back, playing the same sort of awesome music that has made Black Sabbath the iconic rock band that has gained it world-wide fame and fortune.

The drummer on 13 is Brad Wilk from Rage Against the Machine. He does a great job on this studio album though it is unknown if he will join the group when they embark on their North American tour this summer.

13 is the first studio album released by Black Sabbath since “Forbidden” (1995), and their first studio recording with original singer Ozzy Osbourne and bassist Geezer Butler since the live album “Reunion” (1998).

Though the individual group members of Black Sabbath have had problems and things to deal with in their own lives, ranging from contractual disagreements to  Tony Iommi’s debilitating lymphoma, they have somehow managed to spend enough time together in the studio to record one of the best rock albums  so far this decade in their latest effort, 13.

This album is not just one that was thrown together to capitalize on their name and the fact that Ozzy is again the band’s lead singer. They could have likely turned out an album that was crap and if they’d sold it exclusively at an outlet like Walmart, they still would have made out like bandits.

Instead, they took their time and have made a remarkable album. Tony Iommi’s guitar riffs are as lightning-fast as they ever were, and he shines throughout the entire album. I especially enjoyed his guitar playing on tracks like “God Is Dead?” “Damaged Soul” and “Dear Father.”

The seven-minute track, Damaged Soul – which combines a little introductory backmasking and much heaviosity with swing and groove – may be mantric and sound as if it’s three decades old, but that’s how Black Sabbath intended it to sound. It’s the sound of Black Sabbath that the group’s fans have come to almost worship, which is great news to anyone who loves the music of the band.

The album concludes with “Pariah” and at the end, you can hear the sounds of a heavy rainstorm, and the tolling of a bell — great stuff.

The hard rock/metal pioneers Black Sabbath, with 13, have re-established their connection with their blues roots. Ozzy’s singing is as ballsy as it ever has been. He proves on 13 that he can still rock out, and his voice doesn’t show any signs of wear and tear from his increasing age.

Ozzy, to put it another way, simply kicks ass on 13.

The summer tour is set to begin on July 25 in Houston, Texas, at  the Cynthia Woods Mitchell Pavilion and will conclude on September 3rd in Los Angeles at the Sports Arena.

Check out the live video of Blakc Sabbath singing a song from 13, “God Is Dead?”, from Australia!