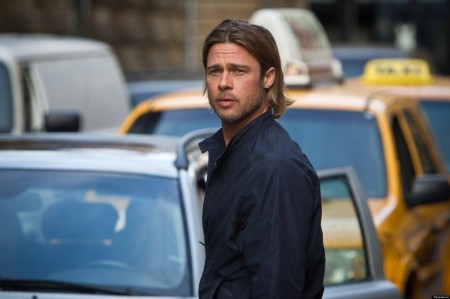 With Brad Pitt’s latest offering, World War Z not even premiering in the states yet, it may seem a little premature to start talking about sequels. But that hasn’t stopped Pitt from dropping a little hint that there just might be a World War Z Two in the offing.

When talking about the film, Pitt said, “There is enough [material] to mine from the book. We could barely get a fraction of the book in [this movie]. So we’ll see. We’ll see.”

Pitt, who plays United Nations employee Gerry Lane in the film, didn’t specify whether or not he himself, would be returning for any sequels. A reporter who has seen the film, says the ending leaves it wide open for a sequel with Pitt’s character in it.

World War Z is a 2013 apocalyptic horror film directed by Marc Forster. The screenplay by Matthew Michael Carnahan is based on the 2006 novel of the same name by Max Brooks. The 2006 book is a follow-up to his 2003 book, The Zombie Survival Guide.

Rather than having a grand overview or narrative, World War Z is a collection of individual accounts, where Brooks plays the role of an agent of the United Nations Postwar Commission one decade after the book’s Zombie War. Other passages relate a decade-long war against zombies, as experienced by people of various nationalities. The personal accounts in the book describe the religious, geo-political, and environmental changes that result from the Zombie War.

Due to the multi-facetted nature of the book, Pitt was optimistic that future films that would also based on the Max Brooks book could work. Despite Pitt’s optimism about the movie’s franchise potential, director Marc Forster is keeping his cards close to his vest on any possible sequels until he can gauge the success of the original.

The director said, “Let’s see how this goes. We hope this movie goes well and we shall go from there.”

Considering the struggle that Pitt had with bringing World War Z to the screen he may not be in that big a hurry to get back in the saddle for War World Z Two. The current WWZ was originally set for a December 2012 release. Unfortunately the production suffered some setbacks; the biggest of which was a third act that need rewriting and re-shooting.

In June 2012, the film’s original release date was pushed back and the entire cast and crew returned to Budapest for seven weeks of additional shooting. Damon Lindelof was hired to rewrite the third act, but he didn’t have the time to finish the script. Because of this, Drew Goddard was hired to rewrite it. All the re-shoots took place between September and October 2012.

The original $125 million budget rose to $200 million because of the problems with the film’s third act. Other problems also affected the film’s production, such as an issue with Hungarian Counter Terrorism Centre who raided the warehouse where guns had been delivered for use as filming props.

85 assault rifles, sniper rifles, and handguns had been flown into Budapest overnight on a private aircraft. Apparently the film’s producers had failed to clear the delivery with Hungarian authorities. The import documentation indicated that all the weapons had been disabled, but, all were found to be fully functional.

On February 10, 2012, charges were dropped after investigators were unable to identify exactly which “organization or person” had “ownership rights”; therefore they could not “establish which party was criminally liable”.

Despite these problems for Pitt as producer of the film, not to mention the personal upheaval with Angelina Jolie’s double mastectomy, he maintained his focus and has worked non-stop in the run-up to the film’s opening in the US. He might be a tad over confident on the films reception. Although it’s looking good so far.

With Brad Pitt’s World War Z receiving good reviews, with many calling the film a “solid” summer film, it doesn’t sound must yet that the film will be seriously considered for a World War Z two until the box office recepts are in and they’ve at least earned back their inflationary production cost. The film opens nationwide Friday.