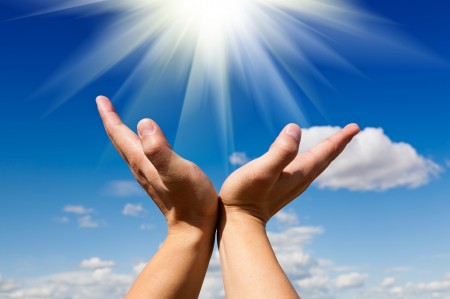 God is a large subject that could be and has been approached by so many different angles by both ‘believers’ and ‘unbelievers’ throughout the ages. To some, God is a being in the ‘heavens’ providing love and guidance to his or her children, answering prayers and preparing a place for them after this life. To others, god encompasses a concept that could be termed as ‘source energy’, ‘universal presence’ or ‘the ultimate consciousness.’  Whatever your beliefs are or are not about god, we must consider that there is greater perspective and influence on our physical lives that contributes to what some call ‘miracles’ and others call ‘self-healing.’ What is this influence? Does it matter whether we acknowledge it as ‘God’ or the ‘Self’ and what is the difference?

At some point in the experience of all people, there comes a moment when what is happening is acknowledged as beyond one’s control, even to the point of deep surrender and even grief. It is generally in these moments that one will, even automatically, get down to the floor – in some sort of prayer position – and ‘ask for assistance’ from something beyond the self. Whether you are a religious person or not does not necessarily determine whether you will talk aloud to some unknown or unseen force. It seems to be the almost automatic response by all humans at a certain stage of especially despair. The question is – does one ‘pray to god’ or ‘ask for guidance from a higher version of self?’ Is there a difference? More importantly, does it really matter?

According to many spiritual traditions, the point of prayer is to step outside of the ego-mind, the ‘knowing’ self into a space that allows for the intuitive, inspirational capacity of something larger to influence you. Some call this state ‘God’ or ‘the holy spirit’ and some call this their higher self or innate healer. Either way, the results seem to be the same. In the state of ‘surrender’ one is more open to receiving information the logical mind was not providing previously. In the moment of release ‘to something greater’ miracles and amazing healing experiences can and do occur.

If we look at any miraculous healing, the common factor is belief in the possibility for healing. Take a look at this amazing video depicting a woman healing from bladder cancer in a matter of minutes:

This is a perfect example of belief in action.  Not only did the woman belief she would be healed, but those facilitating the healing experience were all in common agreement that she was already healed, already whole.  When it comes to healing, does it matter whether we know the experience to be ‘god’ or allow it to be an expansion of the self and what was previously thought as possible? If there is a God, I would assume this great and divine being would want us to be able to attune to the frequency and knowing that we are whole and complete, as so many masters have taught. If that means that we pray to someone ‘outside’ the self, or concentrate that knowing within- in order to expand what we think is possible for the self – what is the difference? I don’t think there is a jealous god out there wanting our attention and love all for himself or herself.  At least that makes the most sense to me personally.

As for miraculous and transformative healings being induced by a god or by the innate capacity of a human being, I question what the difference really is? If a god created us, then wouldn’t we have been created, as the Bible suggests ‘in the image and likeness of’ the deity we profess to believe in? In that case, whether we embrace the quality and capacity to heal ourselves, or give it away to some being in the sky – it is my opinion and observation that the prior is the more empowering choice. Either way, healing is healing no matter who you give the credit to. Though if healing is to become a more predominant experience in this culture as we need it to be, perhaps it is wise that more of us embrace the possibility that we may be able to heal ourselves miraculously by believing as such. Maybe giving the power away to anyone or anything outside of ourselves has allowed too many of us to claim victim hood and irresponsibility for our life, health and experiences. Who knows?

We can only look at the way things are right now in this world and ask whether the situation is positive and ought to continue in this same way, or whether something should change. If we see change as a desirable situation, what other way can change take place other than being the change ourselves? As we change, life changes.  As we personally make shifts in our own beliefs and choices, the world seems to shift in order to align with our new beliefs, as long as we do not waver in them.

We cannot expect that the world will change by waiting for everyone else to do it. By the same token, we cannot look at the world as it is and think that there is nothing that needs changing. Doing the same things over and over again expecting a different result is the definition of insanity.  Perhaps it would be better if more people believed in a ‘god’ or a power outside of themselves, if they cannot do so in their own being.  Perhaps believing in a ‘god’ is preliminary to accepting that we have the power of this ‘greater intelligence’ within ourselves?  The question remains, when it comes to healing the world and our selves – is it God’s choice or is it ours? And what’s the difference?