He Did Have Relations With Another Woman. 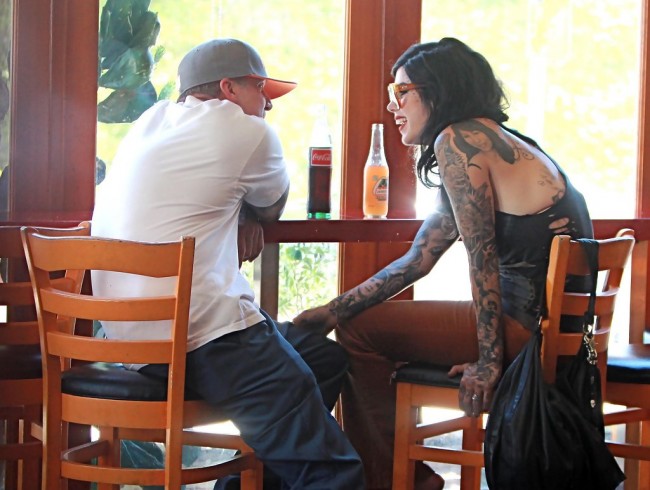 Kat Von D is over Deadmau5, or is she? Deadmau5 released a statement a few minutes ago explaining what had happened and why they broke up. In case you missed it: “All I am saying on the matter: Kat and I split in November and I moved back home to Toronto. During this time, while we were broken up, I did have relations with another woman. Following that, Kat and I reconciled and I acknowledged being intimate with another person while we were estranged. We did move past those issues and I proposed to Kat in mid- December. At the end of June, it was clear that the relationship was not working and we mutually ended the engagement. I was not, at any point, unfaithful to Kat during our time together. I don’t wish to go tit for tat with these kinds of pronouncements and don’t expect to comment further, but I do believe that those who have expressed concern deserve a more complete understanding of what transpired.”It is clear that Deadmau5 doesn’t want any further laundering of the dirty linen outside for all to see. If Kat Von D isn’t careful no man will ever touch her again, or that’s what Deadmau5 secretly thinks.

Well it looks like that for Kat Von D many other things have transpired. On her Twitter account she ripped into the Dead mouse. Saying that  there was a pregnancy and that he should elaborate on that on his Face book blog. We can’t read to much into this because it’s very cryptic. What pregnancy? What happened? Abortion, miscarriage or pregnancy scare?

She was not holding anything back and claimed that Deadmau5 had been having sex with other chicas while they were together. Not really that surprising, is it? In addition was Miss Von D all that faithful herself?

On the Internet there was some outrage about why she felt the need to air her dirty laundry and they blamed her for her past actions. (Karma does exist, doesn’t it?) They said: ” Didn’t she screw around with Jesse James when he was married. YEAH you got it all back didn’t you.. anyway she looks like a man & sitting there online admitting she got pregnant (which means she was having unprotected sex) while he was cheating is just begging for no man to ever touch her again. Keep that crap to yourself girl! Don’t blame a man for getting you pregnant. It’s a two-way street.” What do you think? Is Kat Von D hanging out on dangerous territory? No man will ever touch her again, or is that too dramatic? She thinks she did well by telling everybody what happened but in reality it just looks vindictive.

Kittens with Mittens said: “Whatever happened to keeping your private life private? There’s no reason to engage in this public back & forth “he said/she said”. I hope Deadmau5 just stays quiet because if he says one more word, it’ll just egg her on. They didn’t work as a couple – they should just accept it & quietly move on with their lives.”

Ashley [email protected] “Wait, wait, Kat Von D is pissed b/c her fiancee cheated on her? Um, isn’t that what happened w/ Jesse James & Bullock? He cheated with HER?”

However Miss Kat Von D finished her Twitter rant with the usual: “Don’t ever speak to me again.” and “You are such a liar, you’ve hurt me so bad.” Meanwhile Alessandro added on Twitter: ” I bet Kat Von D has Raise Your Weapon on repeat. Too soon?” Lmao dead .” Kat Von D will probably have a hard time finding a new and willing victim to be her BF. As many Internet users have commented on and Deadmau5 hinted at is that people don’t like it when others air their dirty laundry. No man will ever touch her again, or that is at least what her ex probably, secretly thinks.