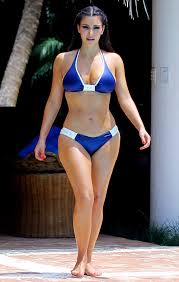 Is Kim Kardashian Really That Interesting?

Today, Kim Kardashian was the buzz in entertainment for posting an online love note to Kanye West, which said, “love of my life”. But, is it a slow news day, week and year, or is Kim Kardashian really that interesting?

Kardashian is littered all over the internet today for the above comment, in addition to her revealing statue revealed today in Los Angeles. She posted online, “Happy Birthday to my best friend, the love of my life, my soul!!!! I love you beyond words!”

But is this worthy of news, or does Kim have some it-factor that many others lack? To be honest, she’s great to look at it, but when her mouth opens, her words slothfully fall like molasses. And, when you actually listen to the words that come out of her mouth—if anyone’s actually listening—if your anything like me, you want to reach for a dictionary and thesaurus without haste.

So, what does Kim have that puts her at the top of the headlines? Besides a mother who’s been labelled as the Joe Jackson of the Kardashian family, put plainly, she’s beautiful to look at.

Without boring anyone with the age-old debate of whether sex really sells (it does! case in point), there’s something more deeper boiling beneath the surface of this debate.

Sex sells, says Lisa Wade, PHd , of The Society Pages.But whose sex is sold? And to who? If it was simply that sex sold, we’d see men and women equally sexually objectified in popular culture. Instead, we see, primarily, women sold to (presumably heterosexual) men. So what are we selling, exactly, if not “sex” We’re selling men’s sexual subjectivity and women as a sex object. That is, the idea that men’s desires are centrally important and meaningful, and women’s are not (because women are the object to men’s subjectivity)

But don’t feel sorry for Kim Kardashian; because what she lacks In “good morals” she makes up for in good financial literacy. Kim’s interest to viewers grew exponentially when her infamous sex tape was leaked to the public (some say she leaked it). The result: an E television show–with off branches for her sisters–among many endorsement deals and relationships with many financially built men.

“Would you be where you are had there not been a sex tape?” Oprah Winfrey asked Kardashian on Oprah’s Next Chapter. “You know, I think that’s how I was definitely introduced to the world,” Kardashian, 31, said of the sex tape.

But would the same have occurred to a male celebrity? According to Wade, if it was simply “sex sells,” we’d see an even pattern of sexualization. But we don’t. More often than not, it is women who are sexualized. What is being sold, really, isn’t sex, but the legitimation and indulgence of (supposedly heterosexual) men’s sexual desires

Seeing that Kim Kardashian fan’s today are mostly young girls and women, how could it be that women are being objectified? Most likely, these same young women are inadvertenly learning that it’s okay to be objectified for a price. So, in the end, women end up objectifying other women for mens pleasure.

That women’s object status and men’s subjectivity is sold to women in women’s magazines (for example, Cosmo and Glamour always feature scantily clad women on the cover) in no way undermines the idea that men’s sexual subjectivity is being sold. It’s just that it’s being sold to all of us, say’s Wade.

To sum, if it was simply “sex sells,” we’d see an even pattern of sexualization. But we don’t. More often than not, it is women who are sexualized. What is being sold, really, isn’t sex, but the legitimation and indulgence of (supposedly heterosexual) men’s sexual desiresThese desires—such as the interest in Kim’s sex tape–have supposedly hurt Kim and her family. Kim said, “I have to live with the choices I have made. And I can’t dwell on it.”

These desires—such as the interest in Kim’s sex tape–have supposedly hurt Kim and her family. Kim said, “I have to live with the choices I have made. And I can’t dwell on it.”However, these choices have fattened Kim Kardashian and her families pockets. After the sex tape was leaked, Kris Jenner was reported to have said. “we can get through anything.” That, they did! Their families wealth skyrocketed.

So, maybe this is what makes Kim so interesting– her acceptance of  “sexual subjectivity” being sold and using it to her advantage?