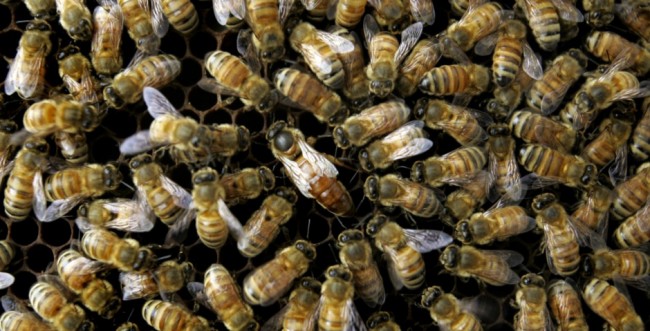 A mass grave has been discovered today in a parking lot in Oregon. Human remains weren’t found, but corpses of bumble bees. (If a bumble bee has a corpse.) About 25,000 bumble bee corpses were counted. So far it has been called the biggest mass death in Portland history. Rich Hatfield, a Portland-based biologist said: “There were literally falling out of the trees, to our knowledge, this is one of the largest documented bumble bee deaths in the Western U.S. It was heartbreaking to watch.” The bumble bees final resting place was beneath EuropeanLinden trees. (These trees were already in full bloom.)

There is a lot of speculation about the motive for these senseless deaths. Some sources inside the biologist community argue that the discovered Oregon parking lot deaths are related to acute pesticide poisoning, because the aforementioned Linden trees have been sprayed with a form of pesticide. This is in order to keep the trees from failing prey to all kinds of insects, including; bumble bees, others argue that the Linden tree didn’t need humans to be involved in order to help this mass killing, and creating a mass grave for all those bumble bees. Because this European version of the Linden tree is toxic to bees, therefore an encounter between the two could only be survived by one; the tree.

Not only did the bumble bee fall victim to this murderous Linden tree, and ended up in the Oregon parking lot mass grave, there were more insects involved. The bees were joined in death by their close relatives the honey bees, their colorful side kicks the lady bugs, and closely related other type of insects who as of yet haven’t been identified. Scott Hoffman Black, Executive Director at the Xerces Society, is quite concerned about the well being of insect life, and wants to bring the offensive and murderous Linden tree to justice. He said: “If the trees are indeed toxic they should be cut down and replaced by something that will provide non-toxic pollen and nectar for bees, on the other hand, if pesticides are the cause, we need to spotlight this as a real-world lesson in the harm these toxic chemicals are causing to beneficial insects. It would be especially alarming to find out whether pesticides are the cause in this case because the Linden trees are not even an agricultural crop. Any spraying that happened would have been done for purely cosmetic reasons.” He might have discovered these two possible explanations, but he should investigate further, and find the cause in order to avoid any more mass bee graves.

Recently the public has been made aware that bumble bees, their relatives the honey bees, and other insects are not only to swat away in frustration, being bitten by or sucked by, (We are looking at you mean, horribly mosquitoes.), but they actually serve a purpose. (However doubtful the role of the blood sucking, poison injecting mosquito might be.) Bees are necessary to the food chain, and during growing seasons.

There is an actual word, or in this case three words, to describe this epidemic of mass killings of bumble bees: “colony collapse disorder”. During this CCD involved epidemic, many US beekeepers discovered that they had lost a third of their colonies the past year. The accused in this murder case is a relatively new class of insecticides called: neonicotinoids. This insecticides make it very difficult for bees to get to know scents, and therefore making it impossible for them to find food. We all should take a stand, and help the poor bumble bee victims family making sense out of this crime by convicting the murderer, and preventing mass bee killings from happening resulting in a mass grave. (Especially on an Oregon parking lot, nobody, even bumble bees prefer, not to die there.)